Menu
Here’s another great family vacation idea: HOOD RIVER!  offered by Melanie at Tough Love Travel!    Email her today, to get your OWN family out, making memories!

They call it the “Walk of Shame”. 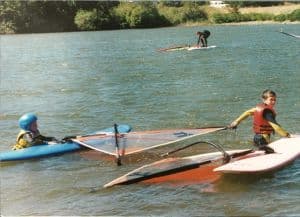 Hood River, on the Columbia River’s horizontal border between Oregon and Washington, is famous for it’s beginner-friendly windsurfing area called The Hook, Those who have learned at Hood River have, sooner or later, been initiated into the Walk of Shame.

The Columbia’s relentless eastward breeze at Hood River gives a newbie a steady firm push as he practices his turns, tacking downward, but if he can’t yet manuveaur his board upwind,  he eventually has to get off, and walk it:  the Walk of Shame.

At some point (usually day 2 of windsurf camp), he’ll master the upwind skill, but until then, the layout of the Columbia river here by Hood River is a perfect training ground.   The Hook —  this arm of shoreline that sticks out into the Hood River current — resembles a biker’s arm, signaling a left turn.  In its enclosure is a large body of river where, on a board, you still enjoy the wind to surf, but you’re contained by the Hook so you don’t get swept downriver from Hood River to Idaho!

As a mother of 4 sons who had the lack-of-impulsiveness common to teenage boys and were just learning to windsurf, I was very grateful for the Hook! 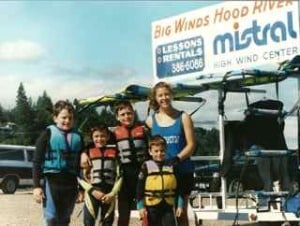 Here are a couple of shots from surfcamp at Hood River…

In the evening, we sat on the banks by Hood River and watched a wind-surfing competition.  I was amazed at their 30-40mph speeds, and even more by their absolute control, executing airborne stunts and cutting frighteningly close to one another as they challenged each other and the wind.
Later, we wandered up the steep gorge-side streets of Hood River and found healthfood cafes, outdoor gear shops, and a few tattoo parlors.   Hood River is a true windsurfer’s mecca!

After a couple days of windsurfing, my sons were sufficiently adept that I could leave them in the hands of their Big Winds instructor, and head across the bridge to Columbia River’s  wine country! 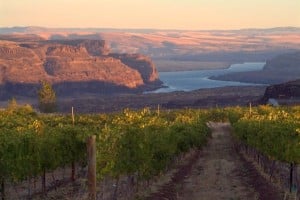 Only 60 minutes from Portland, this area is known as “a world of wine in 40 miles”.

From Hood River, you can make wine country a simple daytrip,
but there’re more than 30 vineyards!  So this area, that’s on the same general latitude as European’s storied wine countries and which benefits from the volcanic soil of our Northwest’ Ring of Fire, can also be a multi-day trip from Hood River.

You can take a river cruise on the UnCruise Line, a small ship that plies the gorge with stops at vineyards, onboard wine seminars, food-wine pairings, and guest speakers.

Or you can embark on your own roadtrip from Hood River.  One great place to start is Cathedral Ridge Winery, in easy reach of Hood River and named Oregon’s 2007 Winery of the Year!

Message from Melanie, owner of Tough Love Travel…
Summer is not endless!   What do you have planned for yourself, and your family, this summer?
I am here to help!  Want a 20-minute phone call to talk about the possibilities?  It’s free!   Grab one right here!