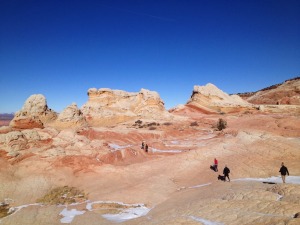 A wild wilderness to explore by the Vermillion Cliffs of northern Arizona.

Not limited by permits (like its nearby cousin, The Wave) yet totally uncrowded.

Only a few hours from both Vegas and Grand Canyon.

…was our trek of choice this holiday season.   Here’s more about our adventurous day in AZ’s White Pocket outback. 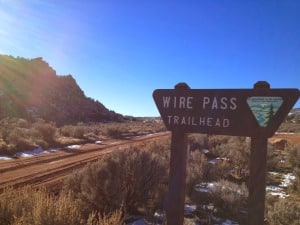 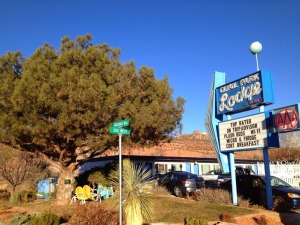 We started our White Pocket adventure off early from the coolest lodge in Kanab, the vintage Quail Park Lodge.  Our guide 4-wheeled us out of town and towards the AZ border, onto dirt tracks past Wire Pass Trailhead, and deep into land that felt more prairie than mountain.

Enroute to White Pocket, we passed fairy chimneys reminiscent of Turkey’s Cappadocia but they were plops of pure red rock instead. The entire country, as a matter of fact, was deep clay red. 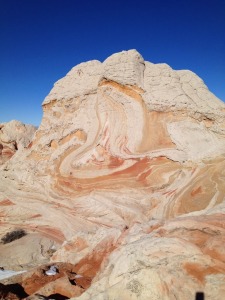 So nothing (except the name of our destination, “White Pocket”) prepared me for the site which we approached a couple 4-wheel-hours later – a fortress of cream-colored rock thrusting out of the grassland which loomed larger as we drove closer, and closer. 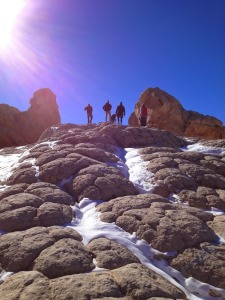 White Pocket is an entire basin of Navajo Sandstone that’s really a mix of cream, mocha, and paprika-colored rock.  Large swirls entranced me (and my camera lens), as the high precipices of White Pocket’s bookend peaks summoned the egos of my 20-year-old sons.

The White Pocket moonscape also had blocks of hard gray stone plopped down like flat tiles.   We felt like prehistoric hunters, scaling the massive scales up the back of a dinosaur!

There was even a cave structure with petroglyphs dating back more than 800 years. 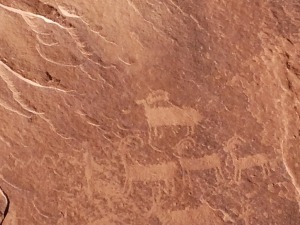 It’s true – we had originally aimed to trek not White Pocket,  but The Wave, featured in AFAR magazine’s November article!  But despite Dreamland Tour’s efforts at the weekly lottery, and the intimidating snowy weather which we hoped would deter many hikers,  permits were not available.   In the end, it was a lucky break for us!

Within White Pocket, there are sections which resemble the famous Wave: 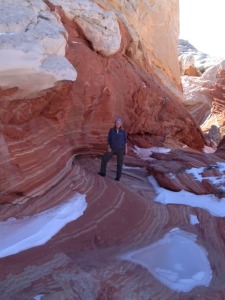 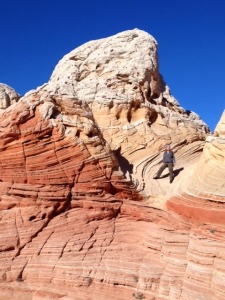 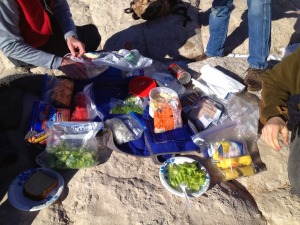 And the White Pocket terrain offered hours of hiking and exploration, topped off with a garden-fresh picnic, served to us atop a butte with views overlooking White Pocket and the surrounding AZ prairies – all carefully orchestrated by our expert guide, Don, at Dreamland Tours.
And if you wonder how they got their name at Dreamland,  my son’s trance (below) tells the story: 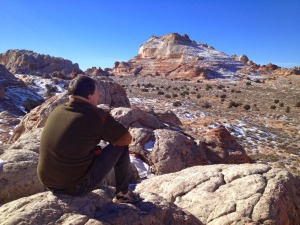 For more info on White Pocket or other guided adventures in northern AZ
(yes, you want a guide!  don’t be one of those stranded tourists in rental cars in THIS outback!),
sleeping on the rim of the Grand Canyon,
or road trips from Las Vegas,
contact me at Tough Love Travel:
melanie@toughlovetravel.com
(609) 923-0304