Pere LaChaise, the most famous cemetery of Paris, has some pretty swanky residents.  From Jim Morrison to Oscar Wilde — all 77,000 of them as a matter of fact —  they make a star-studded neighborhood.  Of course, instead of golden stars on the sidewalk, there are tombs.  Pas une grosse affaire!  Come with me on a stroll…

As we enter under the Porte Principale: 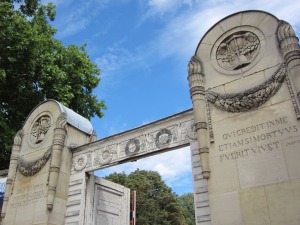 we pass Collette (1920s French author of sexual audacities like Gigi and La Belle Epoque),
then the “Baron” (commissioned by Napolean to raze medieval Paris and create modern sewers, bridges,  the wide boulevards we love today, and even Paris Opera) will appear in Famille Haussmann.
After the famous Monument aux Morts (tomb sculpture created by Bartholome in honor of his beloved wife),
turn right into the Composer’s District.  Here, meet Chopin, a frail Polish man who refused to name his compositions, choosing instead to number them (No.6 in A flat major).  A talented pianist, his frail health prevented him from doing much performing:

And speaking of composers, head east around the loop of Chemin Seine and to your left.  Meet Jim Morrison.  We know him of Doors fame — that growling “Hello, HelLO, HELLO”.  He was one of the only cemetery residents not to be a longterm Parisian  (rule of eligibility for interment here at PL) but the French government didn’t want to lose him.  The stone over his grave says “Kata Ton Daimona Eaytoy”, or “true to his own spirit”.

Now head deep into the property, taking the Avenue Circulaire back to the far right and meet Edith Piaf, my favorite French singer ever!  I adore her story — sent as a 5-year old to sing on street corners to make money for her Grandmother’s
house of prostitutes. Her fragile, lilting voice earned her the nickname “The Waif Sparrow”:

Around the back circle of the cemetery, on a side lane, you’ll find the wild tomb of celebrated Irish playwright Oscar Wilde, decorated with a flying pharaonic angel (whose erect penis was removed around 1905 after public outrage).  Wilde’s story was a sad one… in his homeland, he was often denied credit for his plays because of his open homosexual status, and after a prison stint of hard labor and near death, he was brought to Paris to be nurtured by friends and die on Rue Des Beaux-Arts.

Just forward and to the left is Victor Noir.  A 22-year old, executed on the spot by Bonaparte in 1870, is best known for his political reporting to the commoners, which inconveniently (for the Prince, at least) stressed shortcomings of the government and injustices to the people.  He is buried, just as he died, in full dress, laying on his back, hat askew.
So many people kiss him that the patina is rubbed off his lips!
As you wander the lanes of Pere LaChaise, 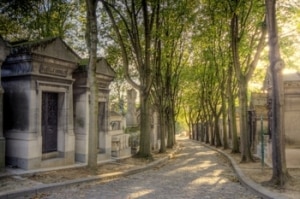 there are touches of humour… and moments of grief:

In the end, perhaps the MOST famous residents are the cats! 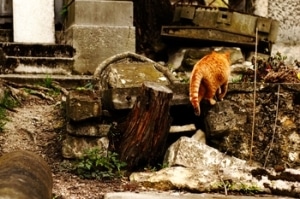