The summer of ’01, my family drove 2300 miles from our home in NJ to take 15,000 footsteps to reach the floor of the deepest canyon in our nation.  But that was only the beginning of our story...


The waking sky had only streaks of yellow and orange when the 5 of us set out to hike to the bottom of the Grand Canyon.
It was a clear July dawn as we strode off the rim — fortified by the dining hall’s scrambled eggs, stocked with bottles of water and salty snacks (no “death by water intoxication” for us!), sheltered in bandanas and caps, and informed by the Grand Canyon ranger safety video. 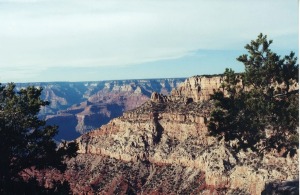 As the waking sun lowered the shadows down the strirated canyon walls, our rocky path grew clearer and the broad canyon vista before us gained depth and color.  The canyon’s walls-  layers of rust, black, and mustard – represented centuries, piled atop each other, and as we hiked down through time, it felt surreal, magical.  It felt like entering a chasm. 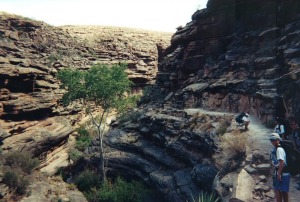 We descended… snacked… hiked… posed for photos.
The random stark pine tree stood out bright and lively against the desiccated landscape, but gave no shelter from the fiery sun,  now beaming down on us from the deep blue sky overhead.
Our boots slowly turned dusty gray from the parched trail below us.
Yet we followed the lone trail, deeper and deeper, into the crevasse.
We crossed over a stream or two, picking our steps from one flat stone to another, and paused to delight over the tinkle of water that flowed through such a stark land.

By Indian Garden (about mile 4), we were thankful to find shade and water spigets.   And as the July heat intensified, we remembered the popular canyon slogan — “Hike Wet”.  So we started to lie down — head and all — in each creek we crossed.   The thermometer had reached three digits. 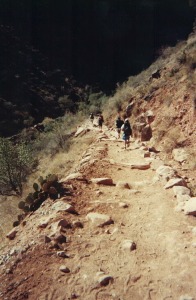 After about 6 hours and 7 miles, WE MADE IT! …. or so we thought.
The trail ended, on a cliff edge, below which the Colorado River roared.
With water bottles low and our spirits the same,  our overheated bodies peered longingly at the unreachable water some 30′ below — a painful contrast of 50* rapids in 115* heat.
Somehow, the GC safety video had failed to include this detail.
With toes at rim, we surveyed our options.  There was really only one.
The trail took a sharp right-hand turn to follow the rolling river banks, with not a speck of shade in sight. The campground bridge MUST be in that direction.
So off we trudged.
But the heat had gotten unbearable, and our resolve was buckling.
When we thought it could get no worse, the path turned to deep sand — reflecting the intense heat back on our cheeks, sucking in our burning boots. 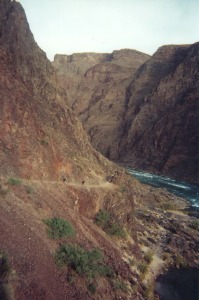 At each twist of the trail, we searched the foreground for some sign of the bridge, and were just too overheated to take the disappointment of endless empty desert before us.
Curves and rises.   Over and over.
I panted hot breath out of my mouth.
I sipped  water, like warm bland soup, from my bottle.
I saw my young crew, staring down at their scorched boots, pushing through the dun sand.
We were getting dangerously worn down.
Then around a bend, a giant rock appeared, overhanging the trail.
Without any discussion, we all 5 scurried to the shade under the rock, and took a collective sigh.
I looked around our circle of red anxious faces.
My 15-year-old outdoorsman was stoic, realizing the severity of our situation.
My moody 13-year-old was fuming, wondering why he wasn’t in music camp in the  Canadian woods right now instead of at the bottom of this inferno.
My 11-year-old, Doug, looked to me, his fearless leader, wondering what I was going to do.
And that’s when I saw the eyes of my 9-year-old, welling up.
Little Tom, overwhelmed, was cracking.
My mind sped — what to say?   how to encourage?  were we even safe?
I felt genuine fear for the first time, and could sense my own eyes stinging with tears.
Then, magically, Doug stirred.
He stepped up to Tom and put his arm firmly around his brother’s shoulder.   In his best big-brother voice,  with barely a quaver, Doug said,
“C’mon Tom… there’s the bridge.  We’ll do it together”.
And with that,  they stepped off.
The other 3 of us were so stunned that we stepped too.

Sucking up our own hidden tears, we plowed onward, and before we knew it, the bridge indeed got larger, closer.  The deep sand pulled less.   And we defied the heat — now well over 120*  around noon — as we single-mindedly and with a new energy, marched to the bridge,  over the wild rapids, and  to a protective ranger and our campground for the night.
NOW we HAD made it!
Just feet over the bridge, we tore our packs off and almost ran for the Bright Angel Creek, a small bubbling tributary.  We splashed down, boots and all — and you could hear a collective “ahhhhhhhhhh”.   We smiled — and even laughed at loud — at our surviving!
We spent most of that afternoon in that creek, with short spurts to set up camp or grab food from our packs.

That evening, we joined the ranger program for a little geology lesson.
The board at the entrance to the program said:

Take Caution.
Temperature today:
137*
Thank goodness — we had been saved by the Crying Rock, and a brave 11-year-old boy.

This blog is dedicated to my 4 sons who, with blind faith and bottomless love (and not much choice, to tell you the truth),  followed  me on our annual 6-week roadtrips all around the United States, each summer of their childhood.