I have ALWAYS been excited to go on a roadtrip.    But not last month… 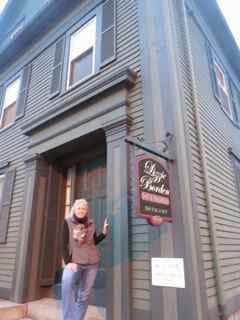 I was heading up 95N to Fall River MA to the Lizzie Borden House where I had a reservation in the Andrew Jennings room.  The fact that this 3rd floor bedroom was deemed “low activity” did not make me feel any better.

WHAT’S IMPORTANT ABOUT LIZZIE BORDEN HOUSE?
Lizzie Borden was an American woman who was tried and suspiciously acquitted of the ax murders of her father and step mother in the Lizzie Borden House in New England port town of Fall River in 1892.
Today guests who sleep at the Lizzie Borden B&B as well docents who work in the house regularly experience ghost activity.    I wanted to see for myself. 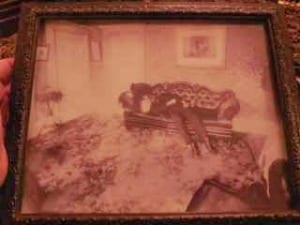 Lizzie Borden and her sister Emma lived with their parents in the Borden family home for more than 30 years. Mr. Borden had been a successful mill owner, casket maker, and even bank president, but regardless of his wealth, he remained famously frugal.   Rumor says that, years after the pleasures of indoor plumbing came to town, the Lizzie Borden house kept their privy in the unheated basement.

Like all families, the Borden family had strife.  Stepmothers,  inheritances, loyalties, and ultimately frugality created tension, and motive, for the murder which occurred on August 4.

DEBATE OVER THE LIZZIE BORDEN HOUSE MURDERS
The mysterious food poisoning that had struck the LizzieBorden House in days before the murder… was it attempted murder, or just spoiled beef and milk served to the family under Mr Borden’s frugal rules?
Was the supposed stifling August heat to blame?
Why did Lizzie try to buy acid only days before the murder?

Was Lizzie’s dress-burning the day after the murder a destruction of murder evidence or an innocent household task?

Why did the prosecutors take the sculls of the Borden parents – complete with ax holes –  into the courtroom?   And could they do that today?

The docent started in the parlor, telling us the 19th century background of the town and the family.  She walked us through the dining room which displayed not only replicas of the murder sculls and shards of household pottery, but also a coroner’s  backboard and antique photos.   As we walked up the curved staircase of the Lizze Borden house, she talked us through the events of the morning of the murders, and we saw — just like the maid had back in August 1892 – how the body of Mrs Borden, lying in a sea of blood by her bed, would have become visible from the staircase.
Tacky as it seems, some of us – me included! – posed as the dead Mrs Borden.  I still thought this whole experience was a joke…. but I was soon to think differently!

SEANCE AT LIZZIE BORDEN HOUSE
Just our luck that, on the night of our visit to the Lizzie Borden House, a seance with a local medium was scheduled.   A self-proclaimed skeptic, I joined more to take notes than to relate to spirits.  But as we sat in the same lantern-lit parlor where Mr Borden had been murdered 120 years before, the table tilted 45*!    Some of us saw shadows of footsteps underneath the closed door  in an otherwise locked-down house! One man had a white orb photographed behind him! 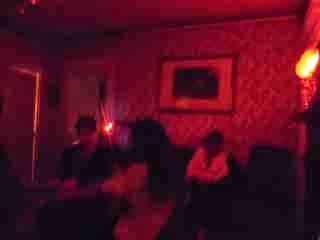 And then the medium announced, “Wait!   Someone new has entered the room!  Does anyone know a Margaret?…. a Marjory?”

Marjory was my Mom.  She died last January.    With only 6 guests in the room and an unlikely name like Marjory, could this be a coincidence?

I went to bed, less a skeptic.

If you’re an adventurous traveler, and want a unique custom-planned trip, I can help you!
www.ToughLoveTravel.com