I have been lucky to visit Cayo Hueso (or Island of Bones, as Key West was originally called) many times, in many ways.

With so much of the globe waiting to be explored, what about this little paradise at the tip of Florida kept me going back, over and over?

ACCESSIBILITY! It was a manageable drive from New Jersey, so I could avoid a family’s worth of airplane tickets and still catch some winter sun.

DIVING! It offered a world-class marine park where we could (somewhat) affordably learn to scuba dive.

ATMOSPHERE! And, best of all, it had a distinctive island feel… a bit of New Orleans mixed with more Martinique than Miami.

So, over the decades, I have lounged at the Hyatt, camped overnight out at Fort Jefferson in Dry Tortugas National Park, and celebrated New Year’s at the The Pier House (where we were introduced to Dark-n-Stormies during an unwelcome cold front, after we watched the conch shell drop from Sloppy Joes Bar at midnight). I’ve even bunked at the southernmost hostel at the end of Duval, and, in Spring ‘04, chartered my own 50’ sloop to sail through the Marquesas and out to Lighthouse Key. I learned, though, this past December, that renting a little conch cottage in Old Town may be the best way to go yet!

We rented bikes on Day #1 and biked everywhere. We were right in the heart of the action, and enjoyed beach fun to the east, Duval street revelry to the south, sunsets to the west, and boat outings of all kinds, only 3 blocks away at the Historic Seaport.

When we need refuge from the craziness of the streets, though, we would seclude ourselves in the lushness of our cottage’s pool-illuminated courtyard. There, we BBQed fish and played guitars and laughed over board games, in a timeless yet precious way.

At the end of each day, I found myself saying, in a Bill-Murray-esque manner, “Now, THAT was a perfect day”… in paradise, of course!”

So I decided to share a few of those delectable days, and here they are…

7am Early risers… Take a stroll in the early light along the still-dozing Historic Seaport, and enjoy the “calm before the tourist storm”. 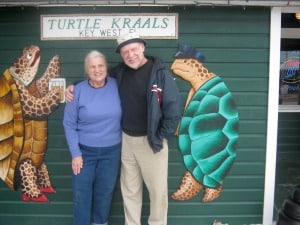 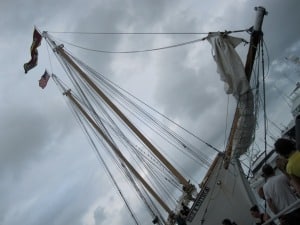 8am Greet the sun on the Ft Taylor SP beach for morning yoga, sponsored by Yoga On The Beach! http://www.yogaonabeach.com/index.html

9am Indulge in a decadent lobster benedict at Blue Heaven… a tropical garden full of roaming chickens, lush shade, and a mimosa-laden bar. There’s even a ping pong court in the sand, to keep you busy while you wait for a table! (yes, this joint is popular!) 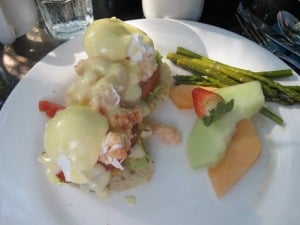 11am Learn something! Right down there by Blue Heaven are several museums…The Lighthouse Museum tells the story of Key West shipping through storms and scavaging, and highlights the first lightkeeper, Mrs. Mabrity, who lost all 6 children and many grandchildren when the violent 1846 Hurricane swept her original lighthouse out to sea!

Or choose the Shipwreck Museum on Front Street, and hear how “wrecking” was a boon to the island economy!

No visit to Key West is complete without a stroll through Hemingway’s home, across Whitehead from the Lighthouse… with its acre of gardens, private writing studio, and famous 6-toed cats! 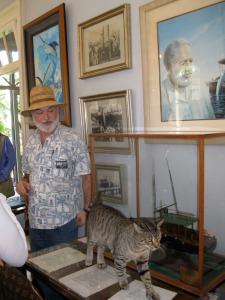 (sometimes the queue at 907 Whitehead can get long with cruiseship passengers, so be prepared with a flexible schedule)

1am Picnic at the beach! Start at Eaton Seafood and grab a sack of Stone Crab Claws… they’re meaty and sweet, and you suck them right out the shell! (don’t forget the spicy mustard dip). Then bike over to Smather’s Beach on the Atlantic! There’s plenty of sun (or shade under the palms) if you want to doze, and catamaran rentals ($40/ hour on 14-footer from Sunset Sports) and pick-up Volleyball (free!) if you want to play! Try one of the homemade Limeades, from the truck on the street, to complete your crab picnic! 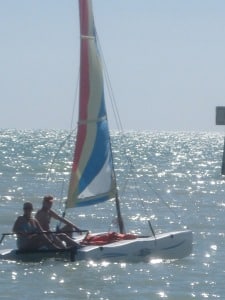 4pm Want an active sunset? Choose between a Jetski tour which circumnavigates the island, or a sundowner sail on the Adirondack II, a racing sloop out of RI (Key West ‘pinks” and champagne served, dogs welcome! $45 pp, ask for Jeff) 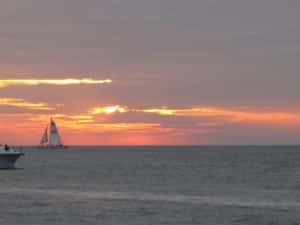 8pm Road trip up to Stock Island (just the next caye north, over Cow Key Channel Bridge) and through the backwater, over to the southern side, to the Hogfish Bar and Grill! Their slogan is “It’s great if you can find it!”, and that’s well-deserved! This open-air, tiki-hut Honkey Tonk serves the BEST grilled grouper anywhere in the Keys (my unofficial, foodie opinion) and also has a shrimp boil kitchen, a hoppin’ bar, and Barry Cuda (or some other local musician) on the mic!

10pm Great steel drums can often be heard at the Alamo at #4 Charles Street, and locals crowd the famous Green Parrot at Southard and Whitehead.