Menu
Call Melanie @ Tough Love Travel to discover YOUR next adventure on the California coast!  (609) 923-0304 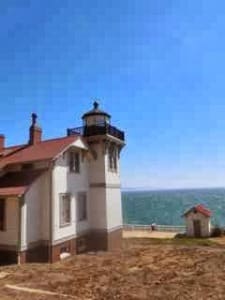 Wednesday is Lighthouse Trolley day in Avila Beach on the southern California coast.  It leaves from the parking lot near the Hartford Pier, for a 1-hour tour that includes a trolley ride and docent-guided tour of the lighthouse at Point San Luis.
We showed up on Wednesday at 1:30.   We missed the weekly trolley.
You can also hike to this California coast lighthouse, but this requires permits and an official guide (and a hike-worthy companion, which I did not have)

So we paddled!  Avila Beach watersports is nothing more than a truckful of kayaks and life jackets on the California coast, and with the outfitter’s last word of warning, “If the winds start to pull you out, hold onto some kelp and I’ll come rescue you”, we rented a double for $20/hour and were off. 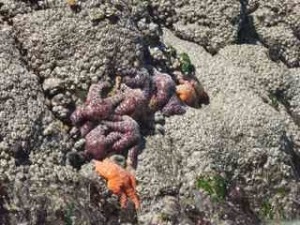 PADDLING THIS SECTION OF CALIFORNIA COAST
Paddling under the pier and along the low-tide shore, we passed bunches of orange and purple starfish clinging to the exposed rocks.  A harbor seal seemed less curious about us than we were about him as he sunned in a small cove, and upheaved rocky islets served as nesting grounds for pelicans and herons. 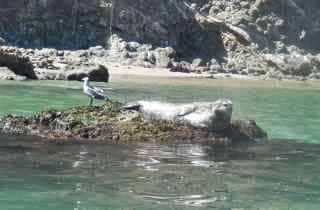 HOW TO ACCESS THIS LIGHTHOUSE ON THE CALIFORNIA COAST
A 30-minute paddle got us to the final beach before the breakwater, where we beached our sit-upon kayak and set out on foot for the short uphill trek to Point San Luis light station. 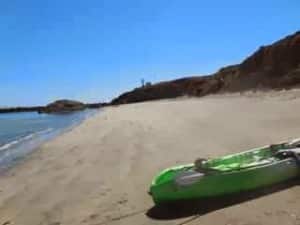 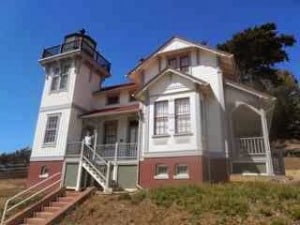 HISTORY OF THIS SECTION OF CALIFORNIA COAST
This charming home-style station was built in 1890 to house the lighthouse keeper and its history, and that of San Luis Bay and this California coastline, is a story of disaster and rescue, drama and peace, and an undying quest for protection of explorers, shippers, and travelers.

It took over a century since the arrival of the Luis Bay’s first explorer, a portuguese named Cabrillo, in 1542, until the construction of the first wharf in 1864 by shipping magnate David Mallagh who was motivated to get goods off of California coast steamers and onto his stage to San Luis Obispo.
The 1870’s brought whaling boats and a huge tidal wave to the California coast;  1880’s brought the wreck of the famous Queen of the Pacific in this harbor.  Between the whaling and the wreck, a lighthouse was deemed crucial, and construction began in 1889.

OBSOLESCENCE OF CALIFORNIA COAST LIGHTHOUSES
Over the decades, compressed air replaced steam; electricity  replaced kerosene.  Alas, the lighthouse was closed by the Coast Guard in 1974, and today it is run by the Port San Luis Harbor District as a recreational and historical site.
KAYAK THIS PIECE OF CALIFORNIA COAST
Our whole roundtrip kayak outing took less than 2 hours and, despite the outfitter’s admonition of winds and ripping current, was perfectly safe.   You see, what they don’t tell you is that they monitor you on video the entire time, from cameras installed on the waterside cliffs.  Harbor police are only a launch away, in case you need to “grab that kelp”.  So wear your lifejacket, stay within 15’ of shore (I mean it!  15 feet!), and go visit that harbor seal.
If you’ve never journeyed to the edge of the California coast to wake up in a lighthouse, surrounded by water and the squawking of seagulls, you ought to try it!
Grab a free 20-minute appointment
with Melanie to talk today!