Next in Our Imagine Series: South Pacific 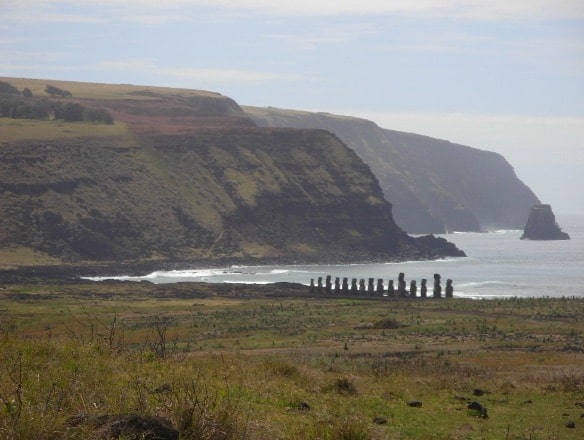 Imagine…. you are on a minute volcanic island in the South Pacific.  It’s the most remote, continuously inhabited island in the entire world and its storied occupants are the Moai.  It is they you have come to meet.

Ramon will introduce you.   He and his wife Josie are hosting you at their guesthouse at the edge of Easter Island’s lone village, Hanga (translated as “bay”) Roa.  Avocado trees, laden with dark fruit, and pink fluffy Chinaberry trees edge their flowered garden where you sit at breakfast, enjoying homemade guava jam and their tales.  Josie’s grandfather was the archeologist who headed up the restoration of the Moai in the 1960’s, and Ramon’s grandmother was the last baby born in a native settlement on Ovahe Beach before the British converted much of the island into sheep pastures in the 1920’s.

Ramon will show you this beach, as well as the lava tubes where early Rapa Nuians grew bananas and tobacco and grapes with protection from the ceaseless trade winds.  He will 4-wheel drive you to the various ahu, or platforms, where the Moai stand proudly. You wander amongst them, their faces towering 40’ over your head and their impassive gaze staring inland, right past you.  You squint up at their proud noses silhouetted against the day’s clouds, and marvel at their oversized topknots, looking heavy and precarious. You sense the generations that have stood on this very ground, their sweat and hopes and despair all brought to the feet of these rigid yet spiritual giants.

Later on, Ramon walks you into the quarry, Rano Raraku. This is where, for 400 years or more, these carved likenesses of the islanders’ forebears were etched out of the tuff of the mountain.    They were rolled into sandpits and stood upright to be tattoo-ed and detailed with earrings and elongated fingers. The completed Moai were then rolled onto wood sleds, and dragged to ahus on the coast.  The islanders ran out of trees for their sleds before they ran out of stone for their Moai. This deforestation is just one of the ways that the Rapa Nuian society, as their tribes grew ever larger tribes and ahu ever more plentiful, exhausted their natural resources to near extinction.

As you walk through Rano Raraku, the abrupt dissolution of the civilization is apparent. Some Moai stand abandoned on the quarry’s hillside, the largest, Te Tokanga, or “El Gigante”, still lies attached to the mountainside – all 65’ and 270 tons of him.

On another day, a caballero rides with you along the remote north shore through a stark, stone-strewn landscape that once was woodland. You ride atop cliffs against which the cerulean waves crashed, through herds of wild horses, and past archeological remains from the 1500’s.

At dusk, you pause at Ahu Tahi,  Sitting on the soft grass, you watch the sun set behind these Moai.  They are still, timeless, serene, stoic, yet not blank. Their expressions are inscrutable yet moving, and you are anchored to this grassy spot long after the orange eddies of the sky turn to violet and the stars fill the heavens like powdered sugar.

Dinner awaits.  Down by the single harbor where scarlet and blue and mustard colored fishing dories rock, side by side, the Taverne de Pecheur has a table for you. On a batik-covered candlelit table, you savor Easter Island’s tangy specialty: ceviche

The last morning, Ramon takes you to the small airstrip and places a necklace of shells around your neck.  “Iorana”, he says. Goodbye, from Easter Island.

Sharing the love of travel!