Next in Our Imagine Series: Exploring the Desert of Morocco 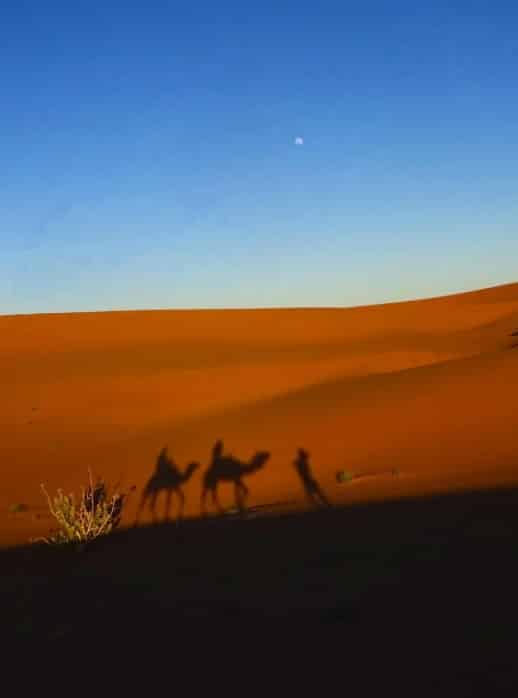 The evening before,  your guide, Rashid, and his pair of wooly dromedaries had met your 4-wheel drive at the edge of Morocco’s Chegaga dunes.  The two camels, honking to each other as their boxy feet plodded, step after sinking step, carried you into the shifting coppery sands of the Sahara.

The desert dunes closed in behind you.  It was apparent, as you rode past endless, unmarked knolls, how easy it would be to get lost here.  Inshallah, God willing, Rashid’s camels know the way to your camp and will deliver you there safely.

You passed through desert dunes that the wind had shaped into a tableau of a tawny tossed sea.  Undulating furrows of sand lined up like a set of small waves, and at the crest, a ridge had been whipped to a backbone so sharp that single grains of sand danced along the surface in the evening’s breeze.

The shadows of your camels and nomad guide stretched taller in the sinking sun of the desert.  And then, you arrived at camp.

Your tent – white canvas with swirling black trim – was ready for you, complete with a king bedstead atop layers of handwoven carpets, and even running water at a brass sink bowl and in the hot shower.  But first, you must be properly received with a traditional mint tea service.

You were led into a three-sided, colorfully-patterned tent and seated on a rough, tightly-woven deep-red Berber rug.  By the glow of a bonfire, a young Bedouin appears, silver tray in hand, clothed in a sky-blue djellaba and turban, coiled atop his head like a cobra, its fine, cream edging contrasting crisply with his deeply tanned face. He gives you a wide smile as he pours a two-foot stream of steaming mint tea into petite green-tinted glasses.

Welcome to the desert.

After your desert camp, two days of High Atlas wonders stand between you and the chaotic cobra-filled square of Marrakech.  You’ll wander through rural Berber markets – the hammering cobbler next to the bloody butcher next to the hooded man vending a mountain of tangerines.  You’ll stand beneath the hypnotic string of arches of a UNESCO-protected mosque from the 1400’s, and hike to humble valley villages to share a tagine lunch in the home of a Berber family.   At the mud-bricked kasbah of Ait Ben Haddou, as you’ll walk beneath the arch made famous from Lawrence of Arabia, you can almost see Peter O’Toole disappearing on his horse into the rocky wasteland.

But for tonight, you drift off to sleep, sheltered within dunes, under a powdered sugar sky full of stars, the muffled lullaby of Nomad drums pulsing in your dreams.

“That was a trip of a lifetime”, you say.  “Let’s do it again next year, inshallah”.

Sharing the love of travel,