Menu
Harry’s is one Paris cafe that makes no pretense of being French! 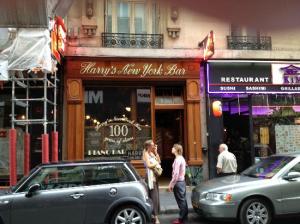 Since its inception, this decidedly American “Paris Cafe” has been draped with Ivy League banners!

….and  ex-pats…
F Scott Fitzgerald and Gertrude Stein, Humphrey Bogart and, of course,  Hemingway (whose shotgun is prominently displayed in the back) all hung out here.   Americans were (and still are) told to tell any taxi driver to take them to “Sank Roo Doe Noo”, a slogan born of the address, 5 Rue Daunou. 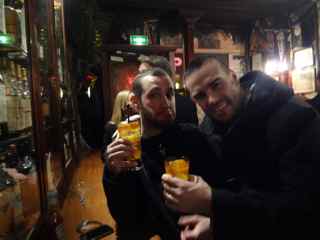 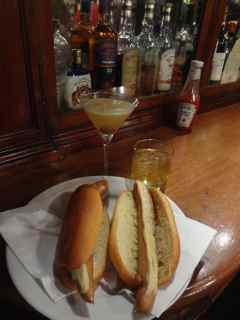 …and American specialties, like the ole hot dog, known here as a Red Hot!  (which i found to be neither red, nor particularly hot, but I wasn’t going to refuse a “dog” on a pub crawl!)

Some remarkable American traditions have thrived here, like the presidential straw poll, conducted here every election since the 20’s (and it’s been right all but 2 times!).

Harry’s could not be any more different than the neighboring Paris cafes.  There’s no café on the menu. No wine.  And (how refreshing!),  no TV!

In fact, the actual interior IS American.   First owner, a prohibition-frustrated Ted Sloane, actually dismantled a bar from NYC (complete with wooden counter that still had american university plaques embedded along the edge) and shipped it to Paris!    He shortly sold it to a Harry MacElhone, who christened it with his name. 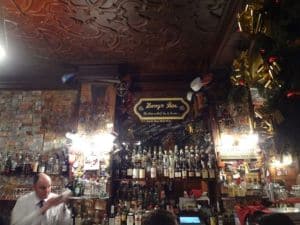 Bartenders are a little surly, but the cocktails are famous.
You’ve heard of the Bloody Mary?  It was born here in 1921, when the bartender played around with tomato juice and vodka, to which one patron said “it looks like my girlfriend, Mary, who I met in a cabaret”.  Turns out that dance hall was the Bucket of Blood, and, thus, the drink was born!

Ever had a Monkey Shoulder (a type of whiskey sour)?  Or a Horse’s Neck (that’s a one-piece orange rind curl in some sort of brandy)?

Wonder which of these drinks James Bond was referring to when he said, in Casino Royale, that Harry’s was the only place he could get a “solid drink”in all of Paris.

As cocktails shook rhythmically behind the bar,  George Gershwin sat in the crowd, jotting his composition for American in Paris.

Never to be confused with Harry Capriani’s bar, of Venice fame, Harry’s New York Bar, by Place Vendome, is one of my favorite Paris cafes!