Menu
Got questions about sleeping at this lighthouse?  I’m here to help! 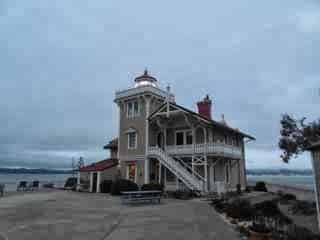 On a sparkly September afternoon, I drove with my 23-year-old up the curvy dirt road that skirts the shoreline of San Francisco Bay, north of Richmond Point.  We had briefly detoured to the Pt San Pablo Yacht Club, but were redirected to this outpost, the SP Yacht Basin, to meet our launch out to the light. 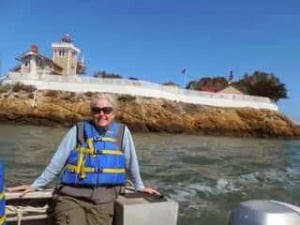 Doug and I, and the 6 other guests for this night, piled into the open-top motorboat with Richard, the East Brother lighthouse keeper,  and scooted into the chop of the bay.

The East Brother lighthouse is strategically placed on the San Pablo straits, where this 450 square mile bay tightens to a narrow passage linking Sacramento’s watershed (the melt-off from the Sierra Nevada) to the ocean.  It originally served as a key transportation route during Gold Rush days and, later, as a shipping lane for the Navy yard near Vallejo.

Between Invincible Rock (a submerged rock 1/2 mile south of the Brother rocks) and the bay area’s famous fog, ship captains needed a guide, so in 1871, Congress approved money for East Brother Lighthouse.   It took several years of legal maneuvering for the rock, previously reserved by President Jackson for military purposes, to be leveled for a lighthouse, but in 1874, the first steam-powered fog horn blew.  This is what it sounded like:

They warn you that your arrival is via a 15-rung ladder that rises vertically from the bobbing boat up to the lighthouse dock, but it’s nothing to worry about.  We all made it and, in a minute, were toasting the East Brother lighthouse with a welcome champagne. 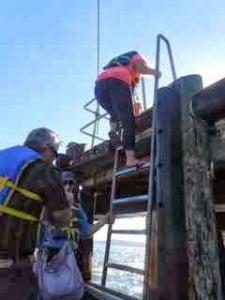 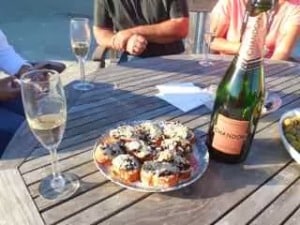 After our apertif and some crostini made with local artichoke, we spent an hour exploring our 150 x 100 yard rock. We settled into our first floor room, the Two Sisters (named after another pair of rocks to the north).   When you go, request the 2nd floor Marin Room.  It’s got an ensuite bath and imagine waking up to water views like THIS!…
Besides the 5 bedrooms and a small museum with keepsakes from early lighthouse days,  our favorite space was the 3rd floor widow’s walk, up by the light.

From this aerie, we could see west to Marin, southwest to the San Fran waterfront, and further still to the Golden Gate Bridge. 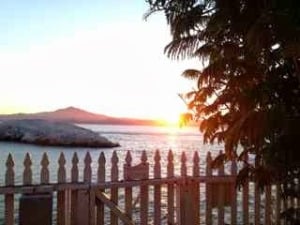 The sun set.   The splash of boat traffic was replaced by the squawk of sea gulls which followed us into the dining room 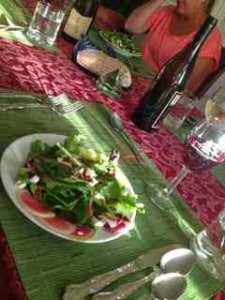 where a gourmet menu of walnut salmon (seasoned with cuttings from the lighthouse herb garden), black rice,  CA wine – of course – awaited us!

Nightfall created a soothing venue to cozy into one of the picket-fence-side benches and listen to the lapping bays waters as the stars came out. 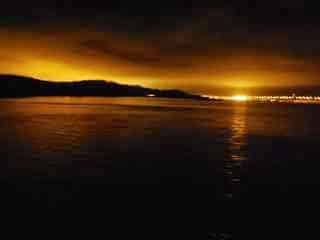 FOGHORN AT THE LIGHTHOUSE
Lucky for us, it was September.    Once November’s weather settles in, the foghorn sounds every 30 seconds, all day and night long. 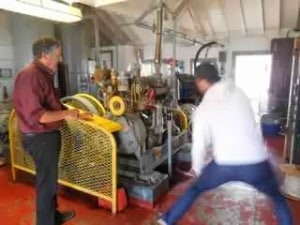 But we had a peaceful sleep, and in the morning, the lighthouse keeper helped us to rev up the original steam-powered foghorn.  It took 7 of us to pull start lines and open valves and measure pressure and move chains, which made us admire the solo lighthouse keeper in the late 1800’s who had to keep this horn operating around the clock in fog and storms!

MORNING AT THE LIGHTHOUSE

Morning was spent sipping coffee as the day broke over the bay,  savoring a scrumptious breakfast,   and inhaling lungfulls of sea breeze — enough to sustain me as I faced re-entry into a city frenzied by America’s Cup racing.
One of my fellow visitors, a city dweller, marveled at how removed he felt from the San Fran bustle by only a 30-minute drive!
At 11am, we crawled back down the ladder and into the bobbing launch.  I was brimming with history and charmed by lighthouse romance.  I knew I would return.  It is only 30 minutes, after all, from Pier 39!
To plan your overnight at EBLS or to hear about other special overnights,
grab a free phone call with Melanie now!