Menu
Wondering what islands to plan into your Galapagos itinerary? I can give you “the scoop”!  For starters, here’s Fernandina, a remote isla on the wild western slope of Isabela.    Grab an free appointment to hear more! 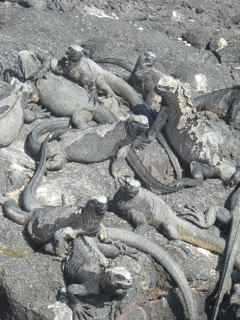 Basking on the sharp black lava, his tail flopped over her back, her leg over his foot, his face resting on his nose. 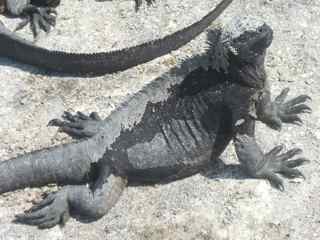 Piles of these black dinosaur-plated lizards are slathered over the rocks.  Measuring almost 5′ nose to tail tip, the marine iguana uses his solar-paneled back to soak up the heat.    When his body feels adequately toasty, he turns “off” his solar heater by turning around, to face the sun.

They’re stoic, even when my foot stomped on the lava only inches from their fleshy well-camouflaged black hides.

When hungry, the marine iguana clambers into the surf, launching his solid body through the waves with limbs drawn back streamlined against his torso, and a flat, perfectly-evolved tail making an ideal paddle to propel him through the water, alligator-style. 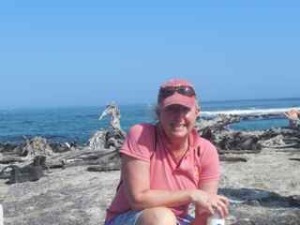 The marine iguana dives underwater for as long as 28 minutes at a time, to dine on algae.  Fully vegetarian, the marine iguana is neither a threat to, nor threatened by, you.  With a snorkel and mask, you can actually float alongside him, listening to the “crunch– crunch — –crunch” as he scrapes his dinner off the rocks!

Then chilled from the 80* water, sated on algae, and wary of threatening sharks, the marine iguana returns to the beach where the sun’s heat serves to digest the meal inside his stomach. 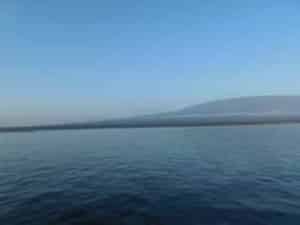 Early on that Monday morning, the Cachalote had motored towards Isla Fernandina.  Not long ago,  this remote and pristine isla full of marine iguana was out of bounds for visitors, but recently, to our great  fortune, it’s been reopened exclusively for small vessels (like our Cachalote).
A wisp of cloud wrapped across the base of this large, leafy, cone-shaped island, but we headed to a bare beach on the northern tip where the persian blue waves slapped against the black lava barranco, colors accentuated by patches of bright white sand and puffs of white sea foam!    The orgies of marine iguana blended perfectly into the black landscape. 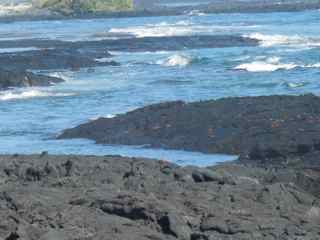 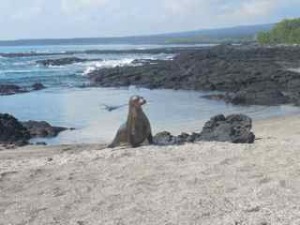 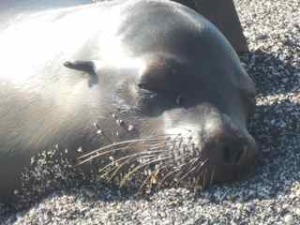 As we took in the wild scene, a very pregnant sea lion waddled up onto the sand, looking very clumsy and heavy.  Even her eyes sagged with fatigue.  Having 4 offspring of my own, I could empathize!

A tiny python, no bigger around than a pencil, curled up on the hot sand, and, closeby,  a full minke whale skeleton — spinal discs intact! – lay, bleached blinding white by 6 years in the equatorial sun. 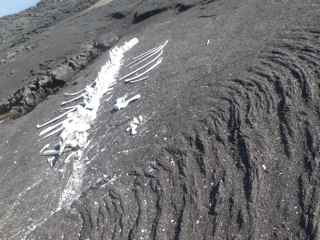 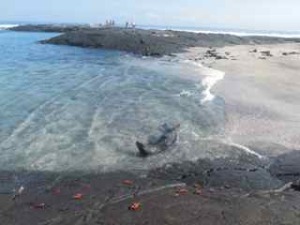 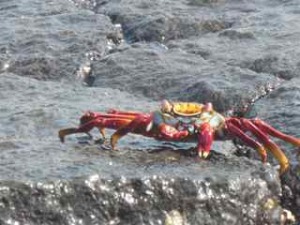 Bright orange Sally Lightfoot crabs skittered over the black rocks,  a juvenile sea lion lolled lazily at the water’s edge, and a flightless cormorant sat nervously on a bulging nest, directly on the ground.
None of these animals seemed perturbed by the excessive “mess” of  marine iguanas who lounged, sunned, and padded around the Point.