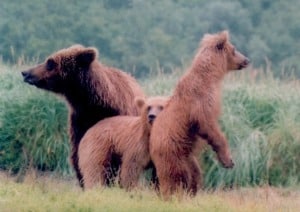 I was up at 4:30am at the Captain Cook Hotel in downtown Anchorage, eager to embark on the highlight of my trip — a day with the bears!


One quick flight down to Homer, one stop at the Sourdough Cafe for my charter lunch, and a photo op with the sea planes at Bald Mountain Float Tours, then our guide Gary Porter showed up and me and the other 9 people, in 2 planes, took off for Katmai!

Our shiny yellow float plane took us two hours over beautiful scenery to Geographic Inlet in Katmai NP.   We landed on a lovely lake , and i climbed out onto the pontoons, then into a skiff to take us a few yards to the houseboat. We were instructed to leave our lunches — no food out by the bears — don rainpants and jackets, and even HIP BOOTS!


As we headed to shore, the bears were already in sight.  I did not want to take my eyes off the bears as i feared they would run away as we approached — yet I had to watch my footing in the loose rocks.  But the bears did not seem to care that we had arrived.  They looked up and took notice of our arrival, then they went back to the business of fishing the stream for salmon.


Gary repeated his instructions to stay close together, move slowly, and quietly.  We came ashore to settle in a group on a sandbar with streams on both sides of us feeding into the lake.


Mother Brown Bear arrived with twin cubs, and they stayed with us for the day. 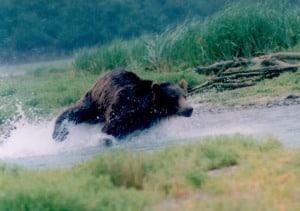 Gary told us he had developed a “comfort zone” for the bears by bringing people there every day to the same spot and not threatening their space.   We were to stay seated on the ground — we were not to stand — no sudden movements — no flash photos.


The Mother Bear became agitated only when other bears came too close to her cubs.  She actually charged and scuffled with a large black bear just a few feet in front of us.   We had to be perfectly still during this confrontation, but the black bear eventually retreated and the Mother Bear returned to her cubs.  It was a tense few moments, but very exciting!


The Mother Bear was all business, all day — fishing for salmon, keeping track of the cubs, and keeping other bears at a safe distance.  In the afternoon, she took her cubs into the high grass on the far side to nurse and nap.


The steady drizzle that had started in the morning, turned to rain fogging the camera lens and my glasses.  It rained hard at times, and I had to stuff my camera into my raincoat between shots.  I must have been a sight, with rain running down my face, but i was perfectly warm and dry inside and enjoying every moment!
(This is proof of my favorite saying:  no such thing as bad weather, just bad equipment!)


Baby bears came begging fish when Mother Bear caught one.  If she thought they were getting too greedy, she’d fuss and growl at them.  One of the cubs was quite feisty and more aggressive at stealing fish from his Mom and running off with it.  Our guide said Mother Bear had smacked the cub yesterday sending him rolling.  He didn’t seem any worse for wear today as he was back to his old tricks.  We saw this same cub catch his own fish.  Since Mother Bear is still nursing these cubs, no wonder she disciplines one who can start to fend for himself.

Birds were everywhere snacking on fish remains left by the bears.  I still have this vivid mental picture:

Bears splashing in the shallow stream.  Birds squawking over head.  Fog and mist obscuring the mountain tops.  There through the raindrops off in the distance sat the float plane bobbing on thelake near the boat.


I was so totally immersed in the moment that i never once thought about food or bathroom (or lack of)  But once back on the houseboat, i was glad to get those heavy cumbersome hip boots off, and get dry clothes on.
I was all of sudden very tired, too.  It was an especially rewarding day for me as i had been concerned if I could actually do this physically.


Not only had we seen bears, but they had stayed with us all day and come so close to us.   The inquisitive cub came so close to use that the guide had to clap his hands and yell so he’d run back to his Mom. Otherwise, we could have had a problem with Mother Bear.

Now for the trip home.  From the houseboat to the skiff to the pontoons and up into the float plane.  I was exhausted, not only from the physical exertion, but also from the emotional experience.
I nodded off in the cab as I rode back to the Captain Cook.   At midnight, I was still washing out my muddy clothes and thinking of my next wildlife adventure — a cruise on Thursday through Kenai Fjords.
Finally, for today, though, a hot shower!


What a day!  What a glorious day!  Most memorable experience!