Landing in the Bush: an adventure out to Bear Country 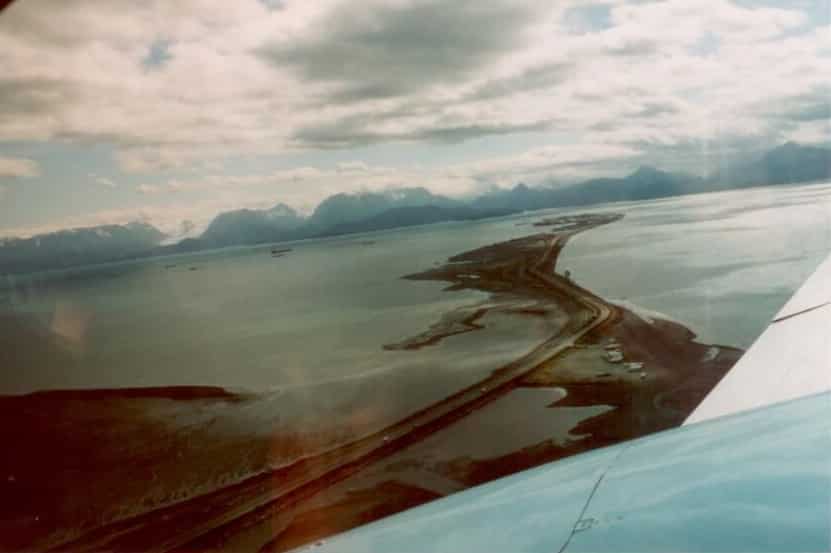 Although being in the presence of a 8′ grizzly — damp slobbery nose, smooth black lips, curved claws and deeply-furrowed coat– is awesome,
it’s the plane  trip OUT to  bear country that is the REAL adventure!

Your first plane — a small bush craft — lifts you out of the civilization of Homer’s Spit and over the wide waters of Gulf, running west away from the rising sun.   You bump around in the air currents, gazing below at the islands of deep forest which look still gray in the early dawn! You’re above the world, yet you can’t see a single sign of humans.

In short time, the plane drops steeply towards the trees, and you’re alarmed, half expecting to hear branches brush the plane’s belly.   Just as it bumps down, a slice of brown appears out of the green. You’ve hit the dirt strip.. i mean,  “runway”.

Dust and screeching, a jiggle of parts, a taxi that feels more like an ATV than an aircraft.  You look out and wonder…Where am I?  But no time to ask.  Only a minute to grab bags and jump out, before the pilot is buckling up again.  “But… wait!”, you spurt out.  With a casual, “take that trail” thrown over his shoulder, the propellers are already whirring, and he’s gone. 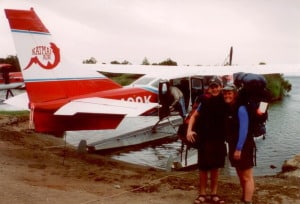 Across the field, into the woods, down the trail, you serpentine through this lonely forest, hearing only the skitters of small creatures and the footfalls of your fellow adventurers, to find a  weathered green wooden lodge, silent on the lakeshore.


Inside, 2 sturdy looking men in heavy oilskin
jackets mumble over their coffee cups and you just hope that one is your guide!


Sure enough!   They’re expecting you!  Ahhh!   Smiles all around, as you head off once more, following Mr Trusty Pilot out the screen door, down the shore path, to 2 float planes, looking so small and shiny red that you think they might be toys!   These float craft only seat 4 passengers each, so you split up, bid adieu, and buckle up for Leg #2 to Katmai!
Now the green wilds that had felt so remote and intimidating just an hour before, are left nostalgically  behind.  You coast deeper into desolation, high up in the currents, over mile-high glaciers, to  endless vistas of snowy craggy mountains!  Your mind conjures memories of Lost In Alaska movie footage and you try not to think about your chances of survival should bad luck cast you in that ice world. 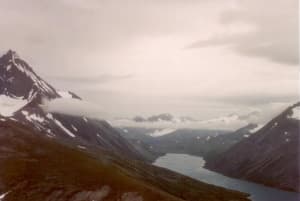 It’s easy to distract yourself though…  the  sparkly snowfields shine brilliantly in the morning sun and you realize you feel a blessing, as one of a select few in this world who get to behold this sight!  You’re on top of the world.


The plane dips towards alpine lakes, and you catch a glimpse of a large brown creature. Is it a bear?   A moose?   It’s gone.

You finally are spit out of mountain clouds, and find yourself soaring above sapphire water.  You can feel the small plane descend and you can see the evergreen-edged crescent shoreline below,  but the pilot circles, again and again, over the bay.

Now you’re lower still.  The shoreline comes alive with activity…. it’s the bears!  A big lone male plods along the edge,  a Mom rests on her haunches as her small cubs roll around nearby,  and another smaller juvenile– only 20 yards away — paws into the sand, searching for breakfast.

The plane continues to circle downward, and your heart beats faster. You keep counting bears.  You’re up to 7!
The big Daddy on the shoreline pauses, stands, and studies your plane.
You’re in Bear Country, and they know you’re there! 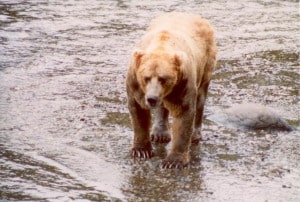 There is nothing like this sort of adventure to give you that sharp “I’m alive!” feeling!  But you’ll want to trust experienced outfitters and have a watertight plan!  You can trust TLT for your adventure out to Bear Country!