Menu
I’ve recently returned from East Africa and here’s a series of blogs to share all that I learned.
Have questions?   Feel free to email, by clicking here!

Do you wonder which country in East Africa is best for your safari?  Although both offer extraordinary safari experiences, Kenya has 5 advantages in my opinion.  Here they are: 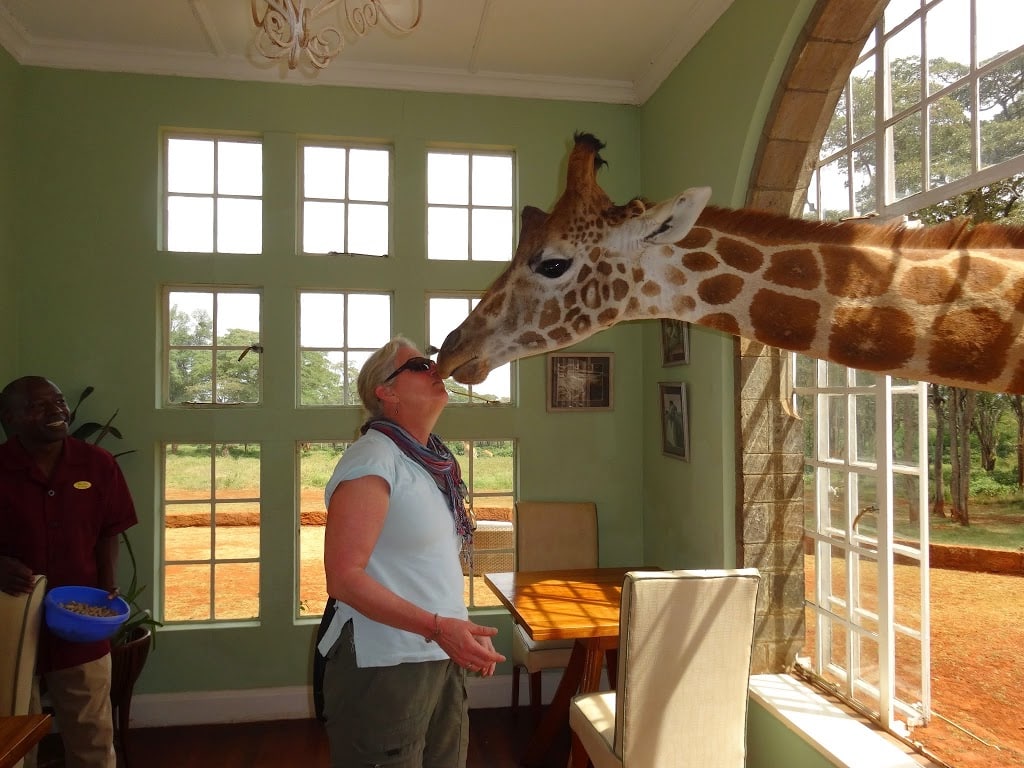 1.  LOGISTICS:  Nothing beats the logistics of a Kenya arrival.  Into the international airport on the eastern side of the city, you can pop 20 minutes over to the Wilson airport for a hopper flight out to the Bush, and you have arrived in Safari country!
You never have to enter the capital city unless you want to join the local market. 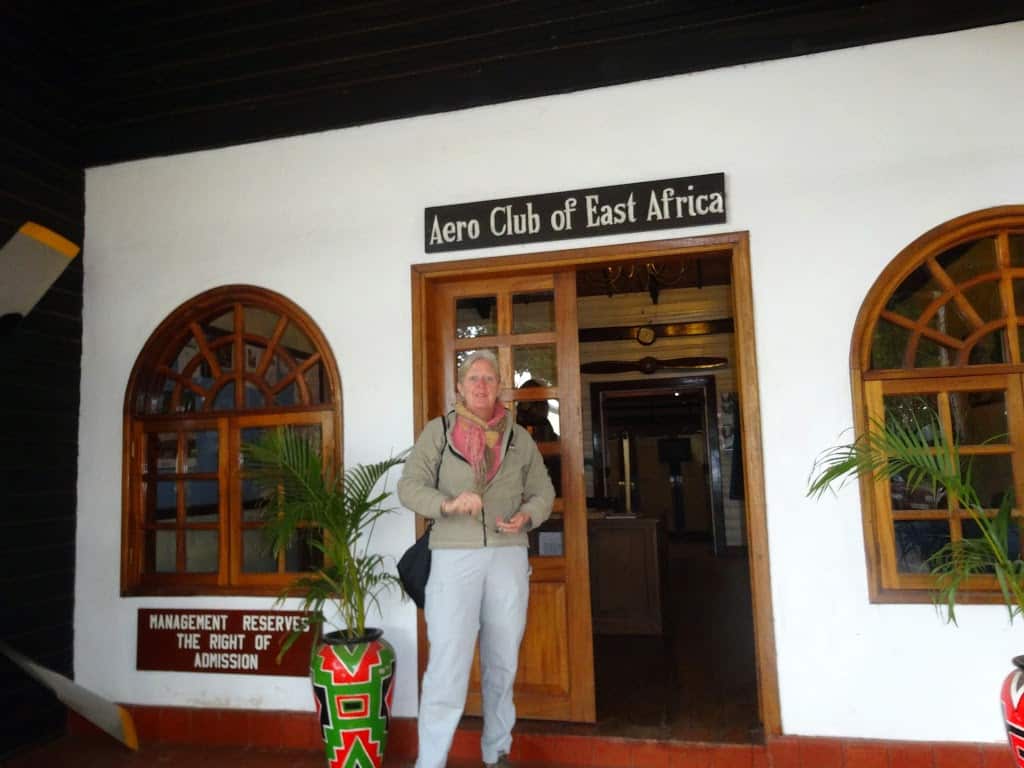 And you have your pick of many lodges near the airport, from the famous Giraffe Manor in Karen (see blog later this week) at  $700pp/night all-inclusive,  to the officer’s club that’s right on the grounds of the Wilson airport for $80/room/night.   Don’t discount this AeroClub – it’s the original hangout where bush pilots traditionally gathered between jaunts into Kenya’s wilds, and many private pilots still room here, dining on the covered patio with a literal front row seat to check out the grounded small planes and watch the landing of new arrivals.

In other words, in Kenya, you can make your international arrival and, with only one plane change and a mere 40 minute flight, you’re amongst the zebra!
2.  TEMPERATURE:  Both countries are right at the equator (pack your sunscreen or buy it there for $25/tube!) but Kenya’s higher elevation means that you’ll be sleeping with a blanket rather than reaching for the Tanzanian fan!
3.  COST:   Flights into Nairobi, Kenya cost around $850, compared to flights in Tanzania’s Kilimajaro airport which can easily run around $1400.   VISAs – minor items in comparison – run $50pp for Kenya and $100pp for Tanzania. 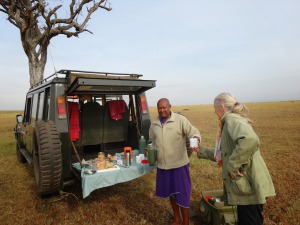 4.  WILDLIFE:   The Mara delivers!   40 minutes out of Wilson airport in Nairobi, you’ll be bumping down on a dirt airstrip in the Mara of western Kenya where your guide and Masai escort wait with a jeep to take you to your camp.  Whether your camp is 30 minutes away or 2 hours is immaterial, because you are game-driving, right out of the gate. 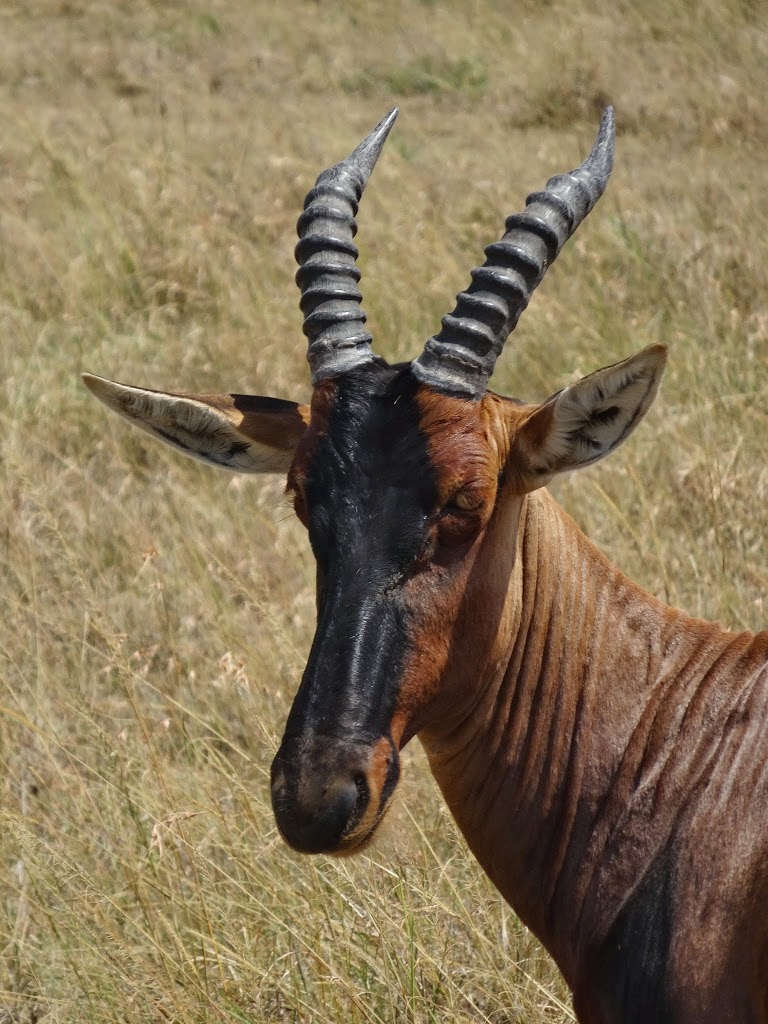 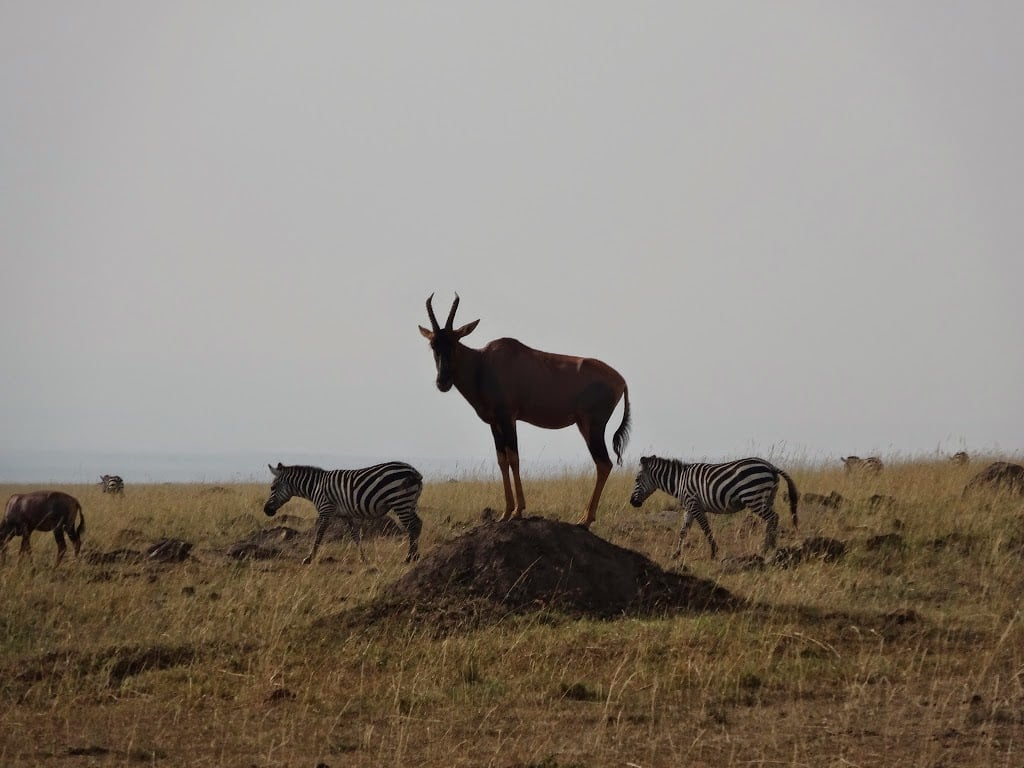 And the Mara delivers!  Even when the Great Migration is centered in a different region, the Mara’s “residential” herds are deep and impressive.  At times, our 360* view around the plains took in literally thousands of creatures.  One morning, we enjoyed a Bush breakfast under an acacia tree while baby zebras and their mothers grazed past, eland posted on termite mounds, dikdiks skipped through the herds, and a family of mighty elephants were silhouetted on the nearby ridge. 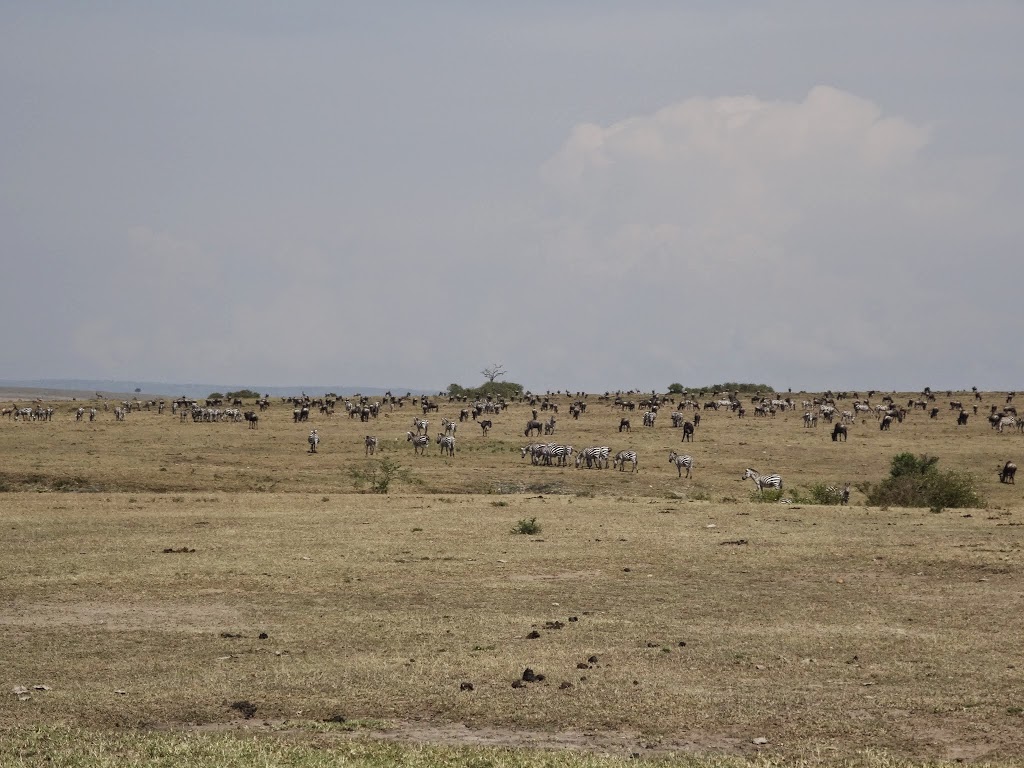 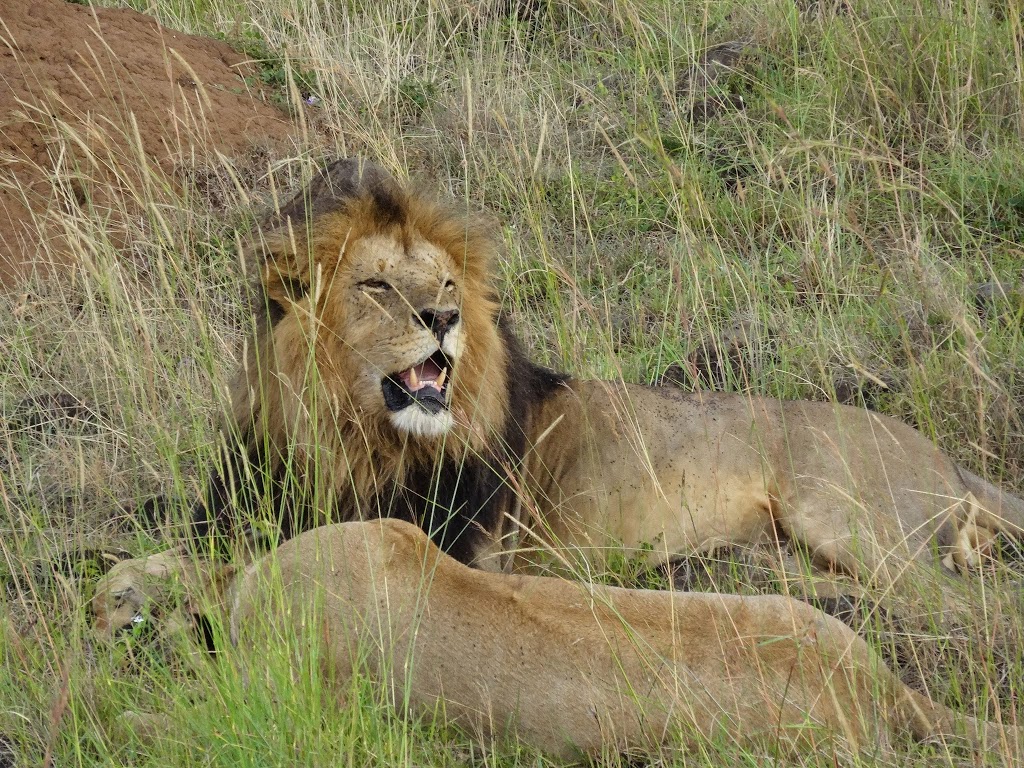 And don’t forget the BIG CATS:  Lions (and leopards and cheetahs) are in both countries, but it was in the Mara that I felt we had the most access. We watched a pride of lionesses hunt through the grasses one   morning.   The night before, we had our sundowner drinks IN the jeep while we visited with 2 lionesses whose 7 cubs were enjoying a late playdate.   And this fine male, off with his mating partner, sat regally on the rise overlooking the plains.

5.  The Masai:  Although the Masai tribes populate the western regions of both countries,  it was in Kenya that I got to visit a manyata, or Masai village.  I went into one of the dung-thatched huts and spent some time exchanging questions with the young Masai woman who lived there.   With the help of my Swahili-translating guide,  I learned about their wedding customs, the school and clinic of their tribe, the significance of their beading, and where the baby cows sleep (yes, that’s INSIDE the hut).  Stay tuned for an entire post about visiting a manyata. 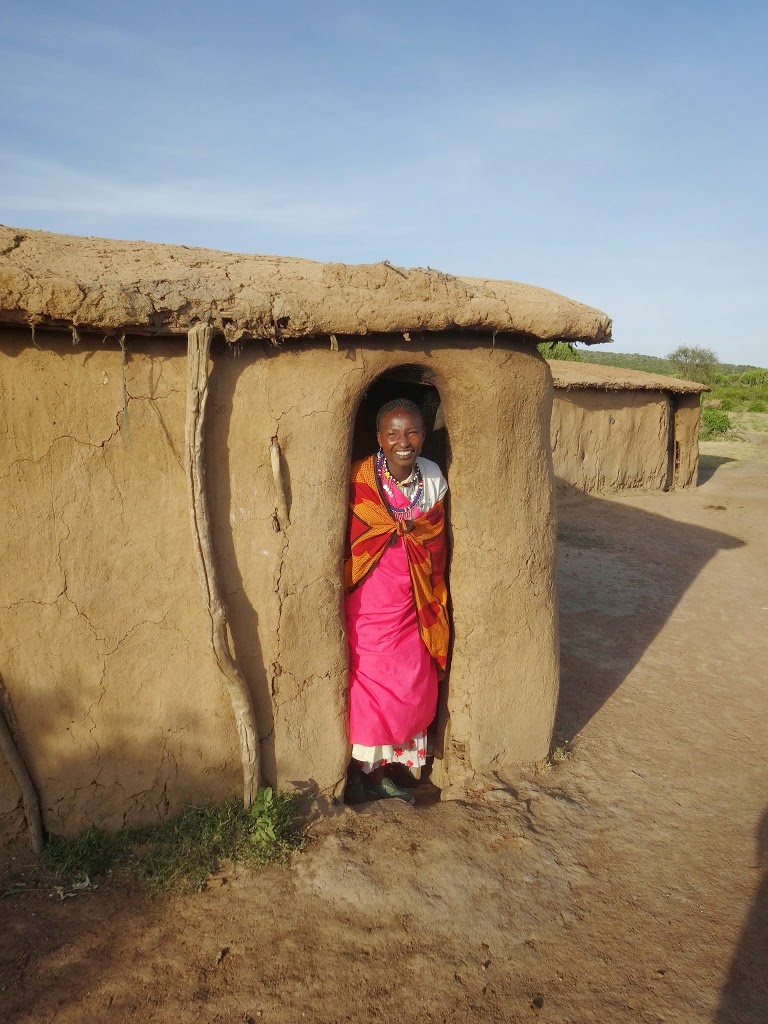 For more details about safari-going in East Africa, schedule a free call with Melanie, the head designer at Tough Love Travel
and stay tuned to this blog for:
Most Amazing Safari Photos
Our feathered friends in the Swamp
Meet the Masai
The babies of East Africa
…and much more.