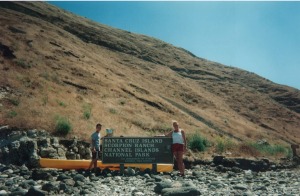 Where is Santa Cruz?   It’s one of  the many islands of Channel Islands National Park, off the southern coast of California.

Very unlike Catalina,  Santa Cruz is completely rustic.  That means that you have to bring your water and food — and kayak guides! — with you when you go there.  But it’s worth it!

Here’s the story of how my family bonded in the sea caves of Santa Cruz, in the summer of 2002…

We had arrived on Santa Cruz the day before, via national park ferry from Ventura.   After 20-miles on the ferry, we then had to cart all our gear for this rustic adventure 1/2-mile inland to our campsite in a grove of giant eucalyptus trees (see below for fun Santa Cruz fact!)

We returned to the beach to snorkel — normal creatures, abnormally crystal water! —  and after a camp dinner of noodles and chicken,  hiked over this scrubby, barren, Santa Cruz landscape to a western cliff, to watch sunset. 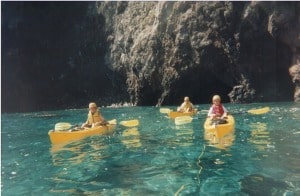 “Island Packers” met us on the beach the next morning.  Outfitted with helmet, vests, and paddles, in our sit-upon kayaks,  our guide led us out across the glassy green water of Santa Cruz’ Prisoner’s Harbor.

Santa Cruz’ shoreline is riddled with hundreds of seacaves.  One unforgettable cave held the Green Room:  you kayak into this dark cave mouth and through a narrow, dark tunnel.  Then a room 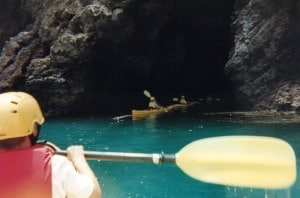 suddenly opens up with sunlight streaming down into the sea from an opening overhead, the reflection creating a vivid green glow to the entire “room”.   I think this was in Sea Stack Cave!

Later we paddled west, around the point, to Surging T Cave and Little Blowhole Cave.  The guide had to time our entry by the waves, since only between sets could you paddle through the opening without the surge bumping you up on the cave ceiling.

I would NOT recommend this outing without a guide who’s not only a kayak expert, but who also has intimate knowledge of these caves. 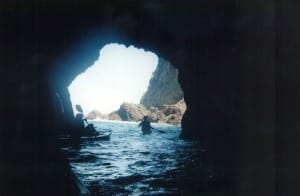 One cave that we didn’t make it to is Painted Cave, one of the largest and deepest sea caves in the world.  It’s found on the northwest coastline of Santa Cruz. Named because of its colorful rock types, lichens, and algae, Painted Cave is nearly a quarter mile long and 100 feet wide, with an entrance ceiling of 160 feet and a waterfall over the entrance in the spring.
Other things to do on Santa Cruz?
There are pristine tide pools along its 77-mile craggy coastline,
picnic tables at Scorpion Anchorage,
guided interpretative hikes at Prisoner’s Cove,
and boundless independent hiking — from flat signed trails to rugged mountainous paths through the Montana area —  anywhere on the eastern 1/2 of Santa Cruz owned by the national park.   Here’s a full map!

Another funny tidbit about Santa Cruz?

The eucalyptus trees were imported here from South America where their hard wood was highly valued for building and shipping.   However, that’s SOUTH of the equator and, on Santa Cruz in the northern hemisphere, the fibers of the tree grew and twisted in the opposite direction (think toilet flushing or bats circling out of a cave…), making the wood worthless!  Still, the shade of their huge umbrella limbs was divine on this arid island and their scent was magical– you felt like you were sleeping in a spa!

Santa Cruz in the Channel Islands remains one of my most unforgettable adventures.
I’d love to set you up on your own summer adventure!
I offer free, 20-minute calls to talk it over!
Grab one here now!