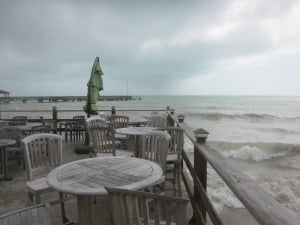 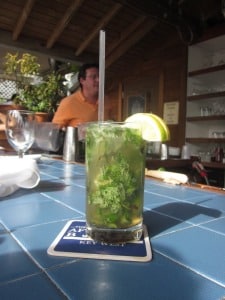 The best mojito on the island, enjoyed with some killer conch fritters, gets you started, but don’t ask the bartend to order food anywhere but the bar… he’ll know you’re a Newbie! 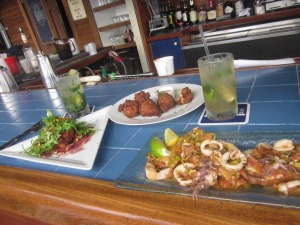 For lunch, some fish tacos and cannellini bean bruschetta with sauteed calamari were slightly spicy winners! 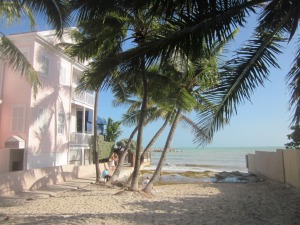 I dozed next door on the Dog Beach 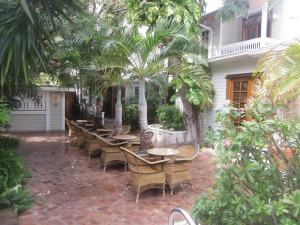 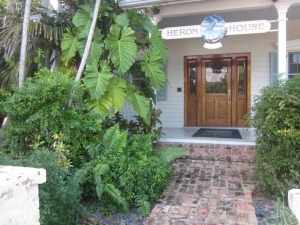 then biked over to my B&B for a quick shower before heading out to sunset.

A Painkiller at the Sunset Pier, while not exactly original, is a quintessential Key West treat! 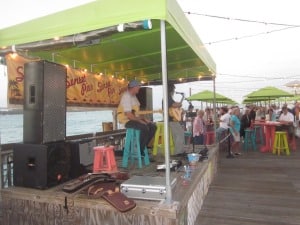 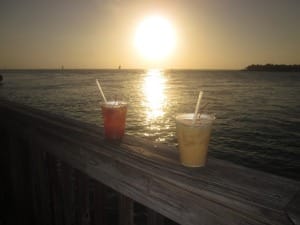 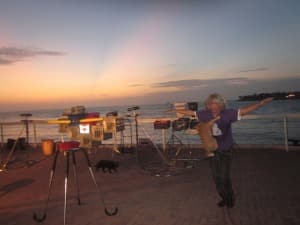 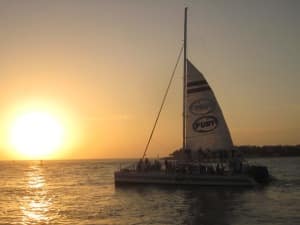 I strolled Mallory Square, as the Cat Man performed before a setting sun and the Fury Booze Cruise rocked on by.

Strolling the shops on the Westin waterfront — nicely uncrowded without any cruise ships at dock — worked up an appetite.

Soon i was ready to bike over to the Flaming Bouy Filet Company, a new dinner Hot Spot in town, opened by a Cinncinati-transplant named Fred.  Despite his landlocked life, he sure knows fish, and

grills a moist Key West Pinks (shrimp, for you out-of-staters) in cilantro chutney, and a sweetly watermelon-drenched ceviche too!    Topped it off with Spicy chocolate quesadilla! 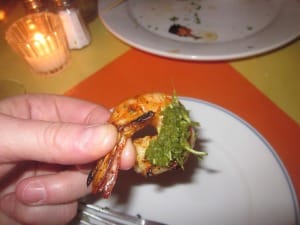 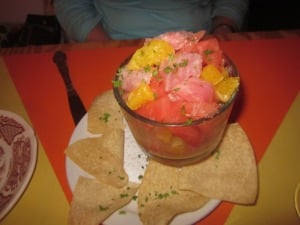 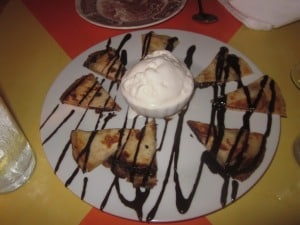 Not quite ready to go to bed, I wandered “the strip”!   I watched martini-lovers on the La Te Da Duval-front barstools

and Gin-n-Juicers (an amazing cucumber concoction made with Hendrix Gin) at the secluded Orchid Bar, a little hidden gem hidden within a 1950’s motel by the same name. 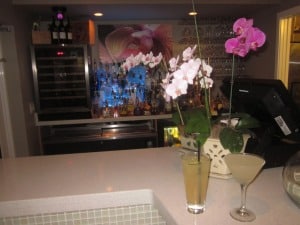 but frankly I was too beat for either, so i ducked into the old standby, Starbucks, for a chamomile tea, and was off to bed.  Day 1 was done! 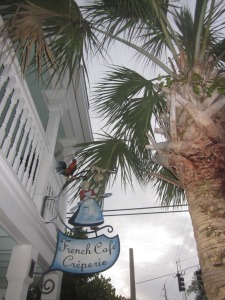 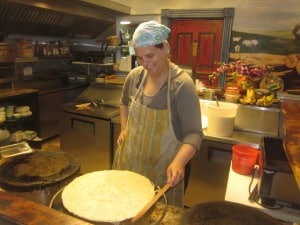 Next morning I headed straight to La Creperie, owned by a Key West Icon, Yolande.  Her sidewalk tables  on Petronia were the perfect niche to enjoy a Banana Lime crepe and a cup of tea, before grabbing some book time on Fort Zachary Taylor beach. 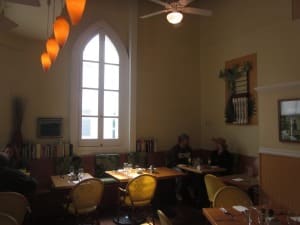 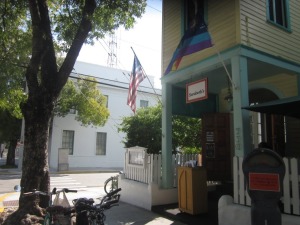 Early lunch called at Sarabeths, a synagogue-turned-eatery over on Simonton.  The cool cathedral windows create an intriguing ambiance indoors, but my choice is the outdoor patio.
A key west Pinks-infused crab cake and salad fill me up, but the strawberry cake, on homemade shortbread, is the real surprise! 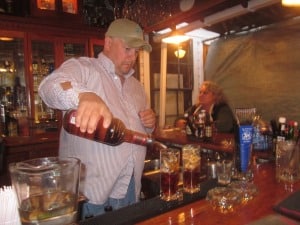 I spend the afternoon biking the hidden alleyways of Old Town,  through the Truman Annex community, and along the southern Higgs Beach trail.

I end up over at the Historic Seaport for a Dark-n-Stormy at Pepes, the oldest restaurant, a cuban-fringed steakhouse, in Key West- opened 1909. 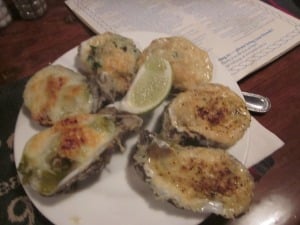 On a whim, i ordered the Mixed plate of Oysters… mexican ones with chile peppers, florentine ones with spinach, and spicy ones with tabasco.
Good choice!

Reservations for dinner were not easy to come by at the Seven Fish, but it’s well worth the wait til 9pm! You could walk right by this little hovel, over on Olivia Street, but I had been wisely directed! The Black Grouper, their rendition steamed with almonds, apricots and coconut, was sweetly divine! 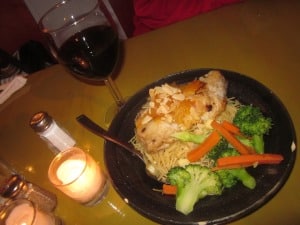 Full to the gills at the Seven Fish, Day 2 was done! 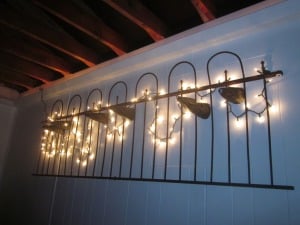 Next morning i found myself on the 8:15 complimentary water taxi to Sunset Key, an 8-minute ferry that delivered me to the private island with a clutch of posh residences, some Westin rentals, and the fancy Latitudes Restaurant. 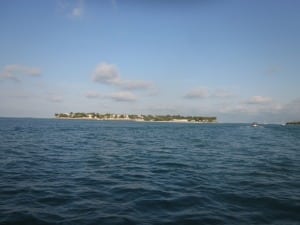 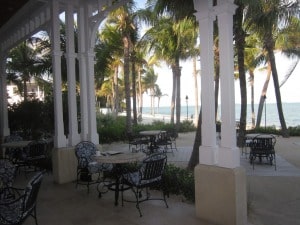 A sister property to the famous Sagamore Hotel in Upstate NY, Latitudes offered me a rod-iron cafe table under the palms of its waterfront veranda.  There, i opened a menu promising the Power Foods — soy, blueberries, yogurt, broccoli —

but i opted instead for some sauteed Yellowtail eggs benedict with a side of spinach, a bursting florida pink grapefruit, and some hot coffee that arrived with a flourish in a silver carafe.
I was stuffed! 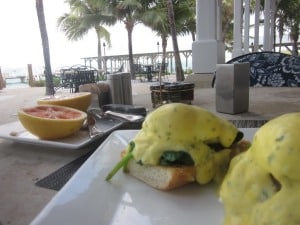 A mid-morning stop on my bike at one of Key West’s homemade gelato stands was a fine idea,

and, as a grand finale, I gave myself an hour on the porch of Santiago’s Bedego before heading back to the aiport.  A flaky chevre tart, some thyme-laced lamb lollipops, and a tall glass of red sangria topped me off.  It was time to go home.

If that was all 3600 calories, I need a new calculator!

Honorable mention goes to Nine One Five, whose Victorian porch, slung with bougainvillea, has great people-watching along Duval as well as tasty Pinks! 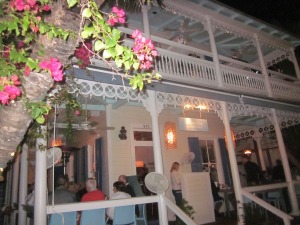 And to Half Shell Raw Bar.  Happy hour’s til 7pm where a couple of drinks and a dozen half-shells run less than 10 bucks! (best seat in the house?  Outside on the dock, watching sunset!) 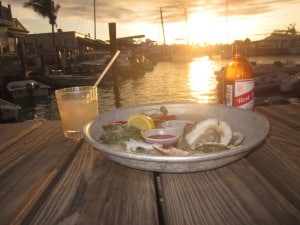