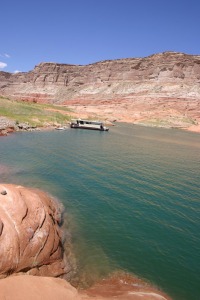 It had seemed like a fine idea… renting a houseboat to explore the canyons and emerald swimming bays of Lake Powell.  When I called for a reservation, the nice Utah gal on the phone said, “If ‘ya can drive a car, ‘ya can drive a houseboat.”

Easy for her to say!  To begin with, there are no brakes on a boat… only a coasting stop (and a reverse gear, if you’re really in a panic!).  Also, it’s more the size of a double 18-wheeler than of any car I’ve ever driven.

But we boldly loaded up, and somehow got it backed out of the slip.   The narrow channels of the marina didn’t leave much room for error, though, and before I knew it, the Dock Master was flagging us down. My novice boating skills had earned us a private escort out of the yacht-filled marina.  Fortunately, my sons were young enough to think it meant we were special, not incompetent.

Free at last on the lake!  The breeze was cool, the rock buttes were a brilliant orange, and our icy beverages fizzed as we cracked open the peanuts. I guess I got caught up in our newfound adventure, and, before I knew it, we were nose-diving!

The bow of the boat, loaded down with 2 huge iced-down coolers, disappeared into the waves, and everything – our bodies, our books, our peanuts – flew South!  I yelled to the kids, “Run!  Run to the back!”, and as if their 70-pound, 10-year old bodies could save the day, they ran rear, grabbing white plastic chairs as they flew off the deck.

I slammed the engine into reverse (see alternate breaking method above), and with a great green slosh past my captain’s station and a thick glug of the motor, the pontoons rocked back upright.  Whew!  That was a close one!

So, all went well for the afternoon.  We quietly toured the lake and dreamed of our week ahead…  Jet-skiing through the warren of canyons, back to the famous Rainbow Bridge!  Fishing derbies (can Mom really clean a catfish?)  Morning hikes along the shoreline!  Ancient caves to explore!  Grand Western sunsets! Bonfires blazing in the desert night! Sleeping under the stars!

As the sky turned rosy and the kids called for dinner, though, I remembered that scary phrase from the boat orientation… “Beaching.” I had asked at the time, “Can’t we just circle the lake all night long?

The idea of beaching is to ram this 15,000-pound box of a boat into the sand beach, hard enough to stick, but not get stuck (all the while avoiding the red boulders for which Lake Powell is so famous).  It was a chaotic mix of boys, anchors, shovels, splashing and sweating, but we got her “set,” and with a whoop of victory, fired up the grill and opened the water slide.   Maybe houseboating WAS a brilliant idea after all.

As the kids chased each other down the slide, I took stock in our first day. I had nearly gotten a ticket, swamped the boat, and terrorized my crew. I had wondered if we had the “right stuff”– when loading up, the other boaters filled their black wheelbarrows with cases of beer, while ours overflowed with scrabble, beach balls, and bags of marshmallows for our campfire.

But as the sun set, we dragged our mattresses out of the bunks and up onto the top deck, to sleep out under the powdered-sugar sky… just us five and the stars…and I knew we did!