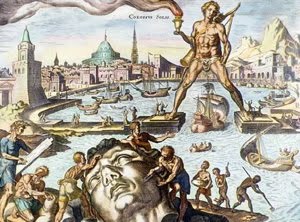 The Colossus of Rhodes, one of the 7 Ancient Wonders of the World, is shrouded in mystery.

It’s usually envisioned as a large man, often straddling the harbor entrance of Rhodes Town, this northernmost city on the Greek Island of Rhodes (pronounced by local guides as Rho-does). But what’s the real story? 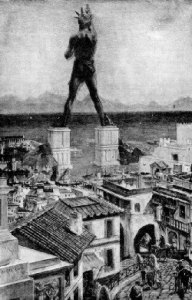 The island of Rhodes had been a key commercial trading partner in the Mediterranean since 5000 BC and a big player in the regional politics (in fact, Lindos, one of the original 3 ancient cities on the island, actually sent an army to fight in the legendary Battle of Troy). Around 1500 BC, the cities decided to capitalize on this strength, and build a common colony for trade. They located this capital at the northernmost end and called it Rhodes Town.

In 408BC, Rhodes decided to intervene in conflict between their good friend, Egypt, and Syria. The Syrians didn’t like this and came to attack Rhodes. They eventually lost and were sent home, but not before Rhodes confiscated all their armor and weaponry.

All this metal was given to a craftsman to create a victory statue: The Colossus of Rhodes.

Taking 12 years to build, the Colossus had a proud but brief life, standing for only 50-90 years over Rhodes Town before being tumbled by a massive earthquake.

The Colossus was allowed to rest in disarray, by order of the Oracle of Delphi

(who’s this Oracle of Delphi? go to http://toughlovetravel.blogspot.com/2010/11/delphi-omphalos-of-greek-world.html)

until more than 2 centuries later when the Syrians, once again in control of the island for a short decade, repossessed their metal and sold it all for scrap.

That is why no remains of the Colossus exist today. 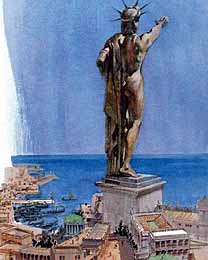 Sketches show that it was shaped like a giant, and functioned as a lighthouse.

It seems to be modeled somewhat after the giant lighthouse of Alexandria Egypt, and plans collaborate this lighthouse theory since Colossus had oil lines to pump fuel up to the top, to burn a flame.

Where was it located?

Unlike popular myth which shows the Colossus straddling the harbor, historic fact shows that this was impossible — today’s harbor, designed in recent years by the Italians, did not even exist in 400BC. This is the entrance to today’s harbor: 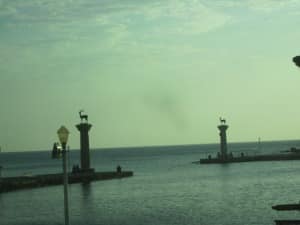 Being a lighthouse, itwould have been showcased somewhere close to the sea, to intimidate attackers and aid navigation. But it was not likely AT the seas’s edge, since if the earthquake tumbled it into the sea, the saltwater would have corroded the metal and made its recovery too difficult with BC technology.

How can we best imagine it? 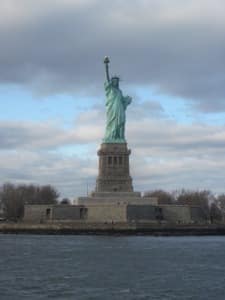 Sketches made around the 14th century show an amazing resemblance to our own Statue of Liberty. In fact, the Colossus is held up as the most important prototype for Bartholdi’s “Lady”. 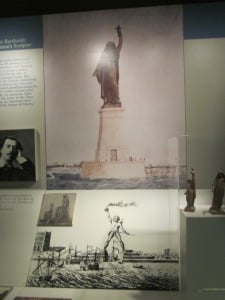 I made a short roadtrip to check this out, and sure enough, there is a dedication to the “Little Colossus” displayed in the first story of our Lady. (when you go, book tickets in advance at http://www.statuecruises.com/ and take advantage of the audio tour!) 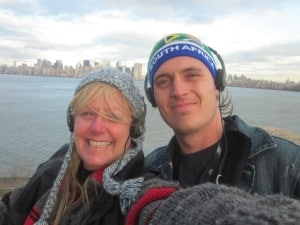 Here is what it says: ” THE NEW COLOSSUS Not like the brazen giant of Greek fame, with conquering limbs astride from land to land, here at our sea-washed, sunset gates shall stand a might woman with a torch…” 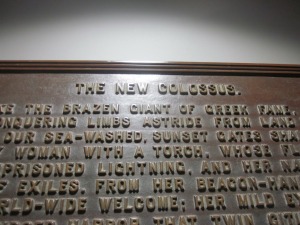 What else can you do on Rhodes? 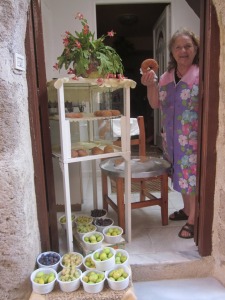 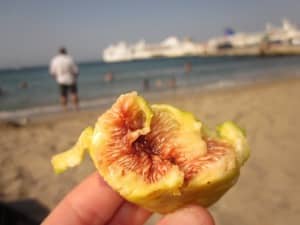 We ate fresh figs sold by a local housewife off her stoop, listened to stories of Knights reminiscent of the Divinci Code, and wandered the labyrinth of streets (Fun Fact: did you know that medieval cities were always built in a maze to protect them from enemies, and the only open squares you will find are examples of modern redesign and rebuilding following the frequent earthquakes which devastated the island). 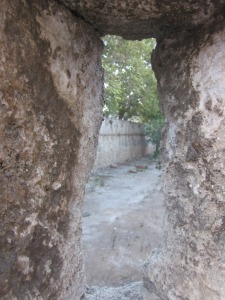 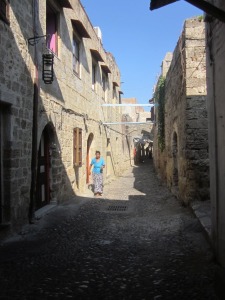 We drove down to ancient Lindos and walked up the 2300 steps to the Acropolis. Fun Fact: Acro is greek word meaning “on the edge”, and Polis is greek for “city”, and this Acropolis is certainly a city on the edge of a cliff! 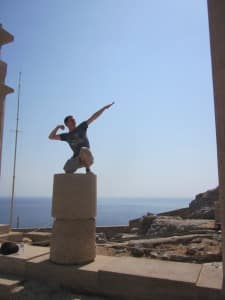 Peering out over the sapphire Mediterranean, I imagined John the Baptist fleeing the Romans in his sailboat (Fun Fact: John escaped certain death by tucking into a tiny harbor hidden beneath the Acropolis here on this island, that is still called the Port of St John) 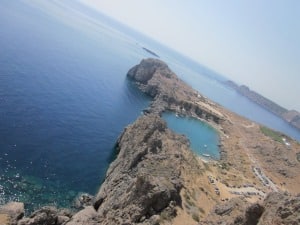 We paid 4euro per person to sit on a gorgeous but terribly crowded stretch of beach, where we lunched on grilled fish at Mertemi, or “Big Wind”. 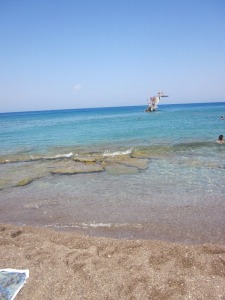 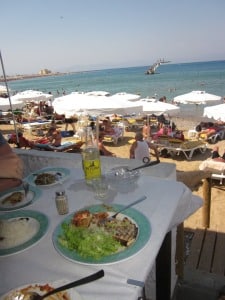 And we visited a potter, one of only 8 commercial artists left for this historic but dying craft on this storied island. 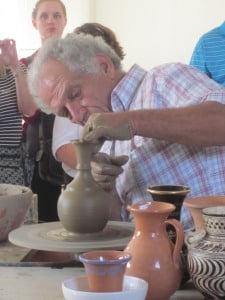