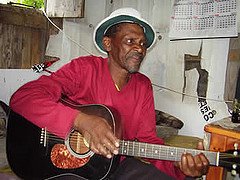 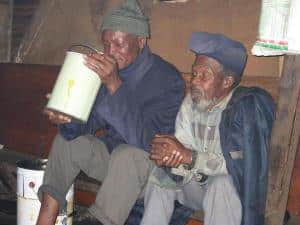 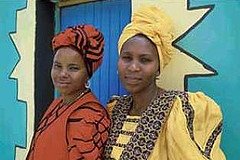 The reality show flickering from the corner tv set was the only thing out of place in the shebeen that day.  Shebeens, the local pubs famously popular throughout black townships, are purely South African… local brews, colorful dress, native dialect, neighborhood gossip, African music and dance, and, of course, fellowship!

Some shebeens are open air, and most sprawl onto patios and sidewalks, but this was a cozy den.  The dark wood walls were thumb-tacked with soccer posters, beer ads, and, in a prominent clearing by the bar, the dusty frame of Nelson Mandela… all barely made out in the dim glow of the single bulb which swung over the room.

A few ladies sat and giggled as patrons, but most seemed to prefer to decorate the entry with their yellow and red cotton dresses and headwraps, acting as the matron or morality police, giving the whole scene a feeling of warmth and security.

The bar (really an informal shelf along the wall) doled out bottles of Castle ales to crowds of 20-year-old men in jeans, but a few older men shared a stoop and a jar – more like a bucket – of homegrown brew.

There’s often live music (check out the sidebar on African favorites!), but today, the radio hummed with the heavy accent of a native folker, while fans streamed in for the afternoon attraction:  the televised “futbol” match between Bafana Bafana, the national team, and Cameroon.

Shebeen is a traditionally irish word, conjuring images of lamb stew and gaillic bar signs, and both in Ireland and South African, fancy versions of the Shebeen have sprung up, with gourmet grouper replacing mealie (corn) soup, white linens in place of batik, and nary a “local” in the place!

The organic shebeen is still thriving, though, and in fact, these previously outlawed establishments are the vibrant, pulsing heart of the community where locals meet, strum, and dance.

On this afternoon, the only other thing – besides the reality show —  out of place was a clutch of pale-faced smiling tourists, clad in shorts and too-white tennis shoes, who’s off-rhythm clapping marked them apart from the organic culture.   The locals didn’t care though.  At the shebeen, it’s all about men and music and fellowship.

Shebeens are most often located in black townships as an alternative to pubs and bars, which, during apartheid, were reserved for only white Africans.Originally, shebeens were operated illegally, selling homebrewed alcohol and providing patrons with a gathering place where they could meet and discuss political and social issues, particularly during Apartheid. Often, patrons and owners were arrested by the police, though the shebeens were frequently reopened.  All classes of black Africans congregated at Shebeens—community members on one lot, lawyers and doctors and musicians around the corner.

In current times, shebeens have become a sanctuary for music and dancing traditions, allowing patrons to express themselves culturally, and eventually enabling the rise and support of the musical genre Kwaito. Currently, shebeens are legal in South Africa and have become an integral part of South African urban culture, serving commercial beers as well as Umqombothi, a traditional African beer made from millet. Shebeens still form an important part of today’s social scene. In contemporary South Africa, they serve a function similar to juke joints for African Americans in the rural south. They represent a sense of community, identity, and belonging.