It’s only about 14 tables — a snug, little nook,  on a dark side street, in the neighborhood of Santa Croce, where tourists rarely wander.  It’s owned by a Naples transplant who, clearly from the decor, never left Naples behind. 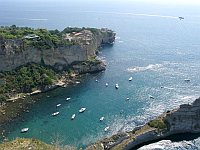 the historic port with the UNESCO heritage, the 80-km Underground, the seaside Lungomare…
and beautiful views from the Posillipo lookout.


But the centerpiece is a 4′ long colorful print of The Last Supper — Last Supper, Naples-style, that is! 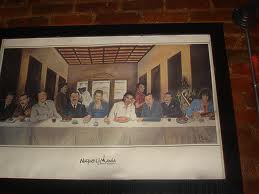 Instead of the two Simons, mean Judas, or doubting Thomas, you’ll see the rich and starry, singers and actors of Naples.   Is that Carlo Guiffre? Toto, or the De Filippo brothers?  One face you recognize for sure, though, is Sophia Loren!

Reigning as Christ, she regally centers the photo.  She looks more like she’s working a party, than communicating serious business, but it’s clear, just as with Christ, that all eyes are on her!

Her fame really ignited Italy in 1962 when she sang Tu Vuo Fa L’Americano in the movie trailer for Five Minutes to Midnight!    But did you know her early story?


Loren was born in the Clinica of Pozzuoli to a neglectful construction engineer father and an aspiring-actress mother.
During World War II, the harbour and munitions plant in Pozzuoli was a frequent bombing target of the Allies. During one raid, as Loren ran to the shelter, she was struck by shrapnel and wounded in the chin. After that, the family moved to Naples, where they were taken in by distant relatives.
After the war, Loren and her family returned to Pozzuoli. Grandmother Luisa opened a pub in their living room, selling homemade cherry liquor. Villani played the piano, and Loren waited on tables and washed dishes. The place was very popular with the American GIs stationed nearby.
When she was 14 years old, Loren entered a beauty contest in Naples and, while not winning, was selected as one of the finalists. Later she enrolled in acting class and was selected as an extra in Mervyn LeRoy’s 1951 film Quo Vadis, launching her career as a motion picture actress.


So what about the pizza here?
They call it “tomato pie”, and it’s classic Neopolitan pizza, with its high border and thin center.

They don’t open til 7:30, and you better have your reservation since every table fills up!

We met the couple next to us — not hard, since our elbows literally bumped as we reached for a new slice!
They were wonderful ambassadors — professionals who worked in journalism in Florence, loved their tight neighborhood, and were “regulars” at Pizzaeoula.

They recommended pies to us, which was helpful since the menu’s in Italian!    You should try the burrata (that fresh mozzarella with the buttery center),   or the arugula! 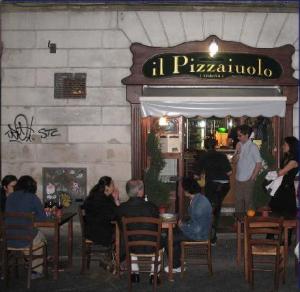 Wine comes by the glass or bottle, and while you want to linger, the place is too raucous, almost chaotic.  As the crowd pressed, we headed out, settling for a lovely gelato on the stroll back to our guesthouse.
Best review on Il Pizzaiuolo?   Cristjian, on TripAdvisor writes, “I should not be allowed to tell anyone”

some photos compliments of TripAdvisor