DELPHI: the Omphalos of the Greek world 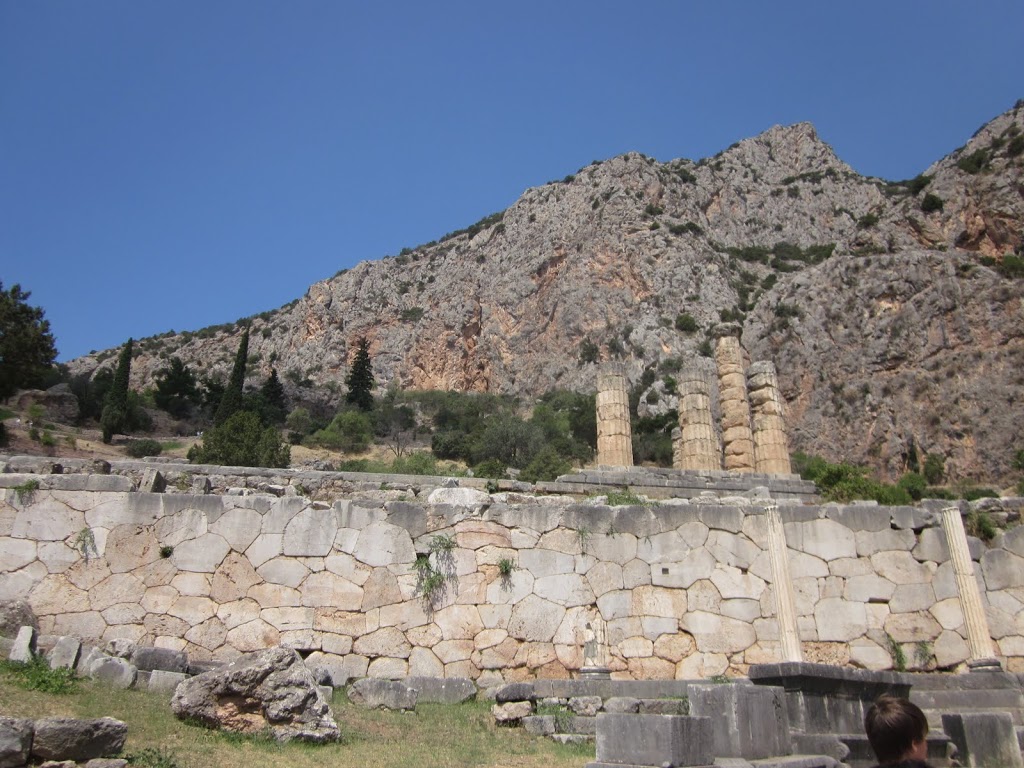 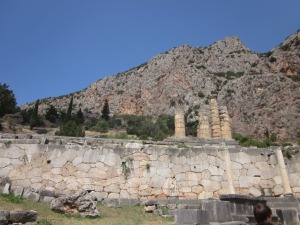 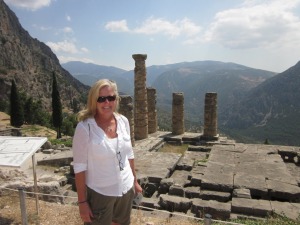 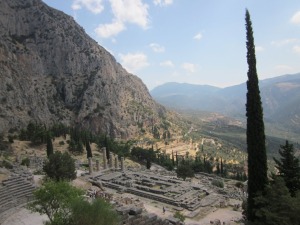 Delphi is perched high on the hillsides of Parnassus, surrounded by deep crevasses and olive groves, some 180 km north of Athens. 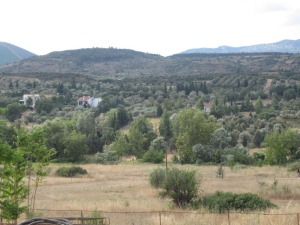 It is now a complex of ruins, but was conceived about 2600 years ago as a glorious temple for the Oracles, to make decisions, hold councils, and talk philosophy, here overlooking Gulf of Corinth on the Ionian Sea 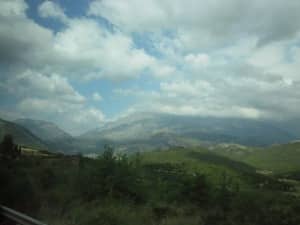 — right in the middle of Greece, where north and south peninsulas meet. It was literally the belly button, or “omphalos”, of the ancient Greek world.
The archeology park starts at the marketplace. 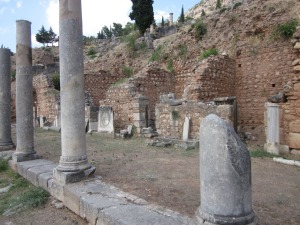 The small stone-walled shops and plain doric, rather than fluted, columns indicate that this section was an add-on– built around 200 AD in a roman rather than greek design, where the omnipresent sign of the cross signified that Christianity was here to stay!
The road, or Sacred Way, winds uphill through 100 or more treasury houses. The treasury houses were the product of Delphi’s growing international significance, as the Oracles advice played large roles in colonizing Italy and Asia Minor. It was a period of prosperity, and many countries — including the Thebans, the Corinthians, and the Syracusans — built treasury homes here. The most famous is the Treasury of Athens, although all were chock full of precious gifts and jewels in the 7th and 8th century. 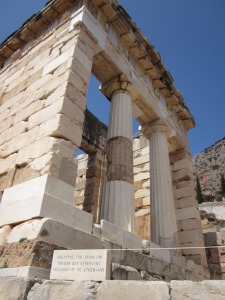 Nearing the road’s crest is the original site of a huge bronze serpentine column, called the Tripod of Plataea, made to commemorate the Greek’s victory over the Persians. Removed by Constantinople in Roman times, it currently presides over modern day Istanbul’s hippodrome. It originally was covered in metal, and adorned with a golden bowl supported by 3 serpents heads. Virtually all of this decoration was destroyed during the Crusades and the Ottoman conquest (one of the bowls is at Istanbul’s Archeology Museum), or removed to make coins, but the basic serpentine column can still be seen today, though not at Delphi. 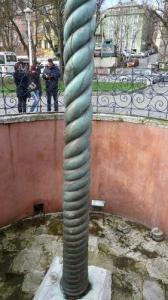 The main attraction at Delphi is the Temple of Apollo, who, in greek lore, came to the port below as a blue dolphin. 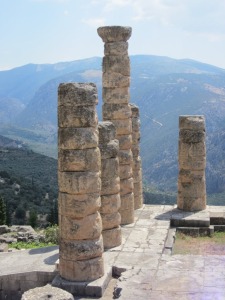 This was THE destination — where Kings, Generals, and ordinary citizens would journey, to cleanse themselves in the waters of nearby Kastalia Spring, pay a tax and often sacrifice an animal on Apollo’s altar, before seeking wisdom from the Oracles.
Higher still is the 5000-seat amphitheater, and at the top, through a lane of tall pines, is the stadium. Supposedly, there was originally a hippodrome here at the very top, but no ruins have been found. 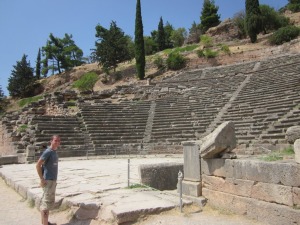 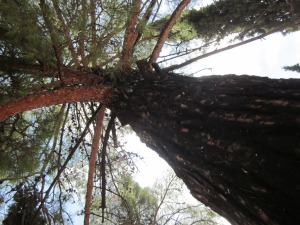 Of course, many of the most remarkable pieces are protected today in the Delphi Museum, including the site’s most famous piece, the Charioteer. It is a larger-than-life bronze statue that is whole, although only parts of the actual chariot ensemble remain. It is so well preserved the hair still is detailed, curling against the statue neck! It is the only remaining bronze from this site, because it was lucky enough to have fallen and been buried, and thus rescued from pilfering. Even the eyes, pure onyx discs, are original! 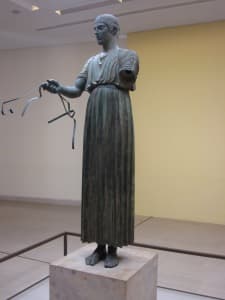 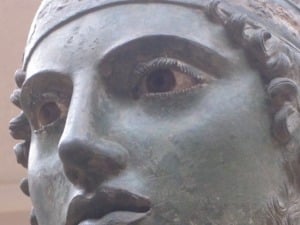 Decorating the site were countless statues and friezes. 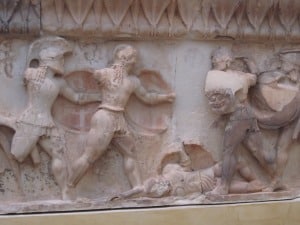 Males, aspiring to be athletic specimens, were shown nude (in fact, the word gymnasium means “nude” because it is where the nude Olympians would come to train and compete.)
A famous pair of nude Twins, kouroi statues sent as a gift from King Hera of Egypt, illustrate a remarkable difference in style: Egyptian bodies were blockier, positioned with the left foot in front, and with long hair or headdresses, 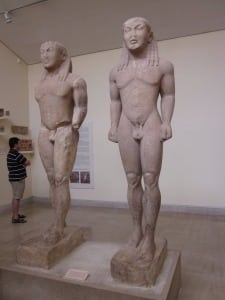 whereas the Greek bodies were more life-like, with softer faces, prettier stances, and curly locks of hair.
If you see a male statue from this period draped in robes, he is likely a philosopher. 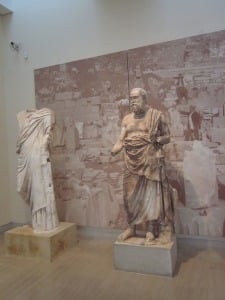 And females of this period– often the sibyls, or enlightened advisors to the Oracles — were shown never nude, but instead robed and with sweet faces.
There are caryatids (careful inspection shows holes in the hair where crowns and necklaces once adorned these stone beauties) 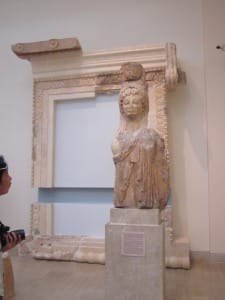 and sphinx from Naxos that’s over 2.3 meters high. 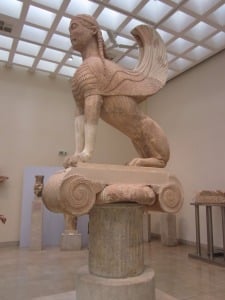 Collected inside the museum are lavish gifts from the ruler of Phoenicia, current day Lebanon. These treasures include gold crowns and chains which often decorated the girl statues (as above), and a huge and wildly precious bull statue, laced in silver with golden horns and yoke.
And, of course, there is a marble Omphalos. 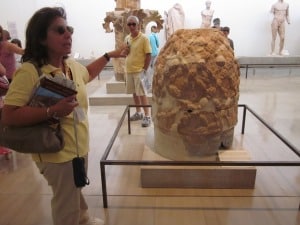 As you drive away from Delphi, you can’t help but feel enthusiastic, for, as etymology suggests, En means “in”, and Thu means “God”, so enthusiasm means to have God in you — a just sensation from this once holiest site in all of Greece.