We had risen early, to bike the beach trail east towards the town of San Pedro. 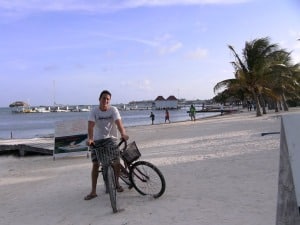 At times it was difficult, dragging bikes over seawalls and through deep sand, but it provided a unique seaside perspective, and as we splashed along the lapping shoreline, we saw dive shops open their shutters, young boys arrive to hawk homemade necklaces,and tourists arise from their huts and hostels to embrace another day on the island. 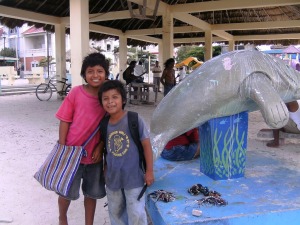 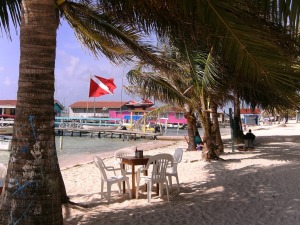 Our day would be more off, than on, the island. We were going on a lobster- BBQ adventure!

After breakfast at the Plantation House (an indulgent affair — mimosas, juicy mangoes, parsleyed eggs Benedict, all enjoyed on our casita patio overlooking the palms and sea), Juan, our guide, whisked us off the dock and down to the mangroves, to net sardines in the generations-old manner he had learned from his grandfather. His trained eye scanned for the silver clouds and he tossed and scooped with the rhythm of a dancer, until our cache was full and we were off to the reef! 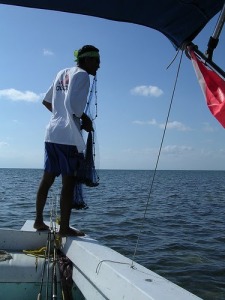 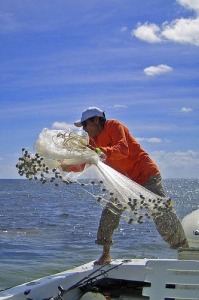 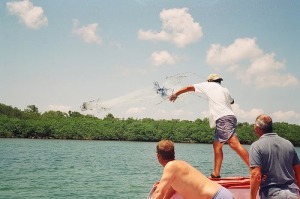 An hour or more we casted and reeled…and roasted… in the tropical sun, pulling in some Jacks, a Snapper, and a single triggerfish which he nonchalantly said, “we’ll save that for the sharks later”

Then, we motored over to the shallow reef and we drifted with the current, teasing barracuda onto our hook, and wondering about the stilted fishing huts that dotted these shallow waters. 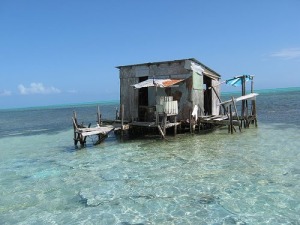 Owned by local families, these peeling, simple shacks had a cleaning bar that ran along one side, and a rickety covered porch along the other. A few clusters of kids snorkeled with spears, and in the end, took at least a dozen barracuda compared to our 3.
Time to lobster! 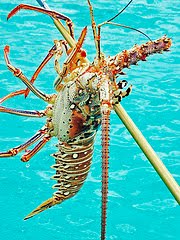 Dropping anchor on the north side of Ambergris, Juan handed us each a hooked, 6′ pole! Overboard, into 12 or so feet of water, we floated with our snorkels, scanning the lobster “carports” – these 12’x18′ wooden and plastic flats that look a bit like a flattened parking carport – for a protruding antennae or flurry of sand from these caribbean crayfish, known locally as Spiny Lobsters.

Turned out, actually hooking the crafty crustaceans was not as easy as it looked! My type-A son slapped the water and cursed the reef gods, until he finally got the hang of it and snagged more than a dozen! I even hooked one, and got an “assist” on a second! 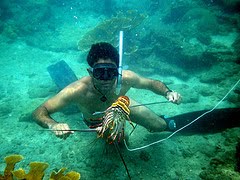 We hyperventilated in the waves, but we’d dive down again, and chase more of them around, making our lungs scream as we pulled at the “carports”, trying to force them out of hiding.

Once hooked, they’d squeal and stretch as they were pulled to the surface, but soon, they were in the boat, off the mooring, and heading to the beach, to star in our lunch BBQ. 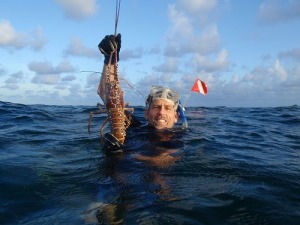 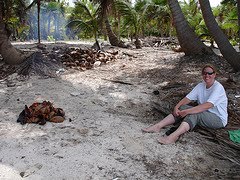 I had been curious all day, about the bulging sack of dried coconut husks in the cockpit, but what a perfect fuel for our beach bonfire! In a shallow pit beneath some palmetto, the coals smoldered. Juan cleaned and foiled our catch, spiced it up with onions, lemon, and his secret ingredient….mayonnaise! I had turn my eyes from the fat but I couldn’t resist the the scents and sizzles that soon came off our fire, and the resulting feast was madefiner only by the isolated cove and mirror blue waters which became our lunchroom. 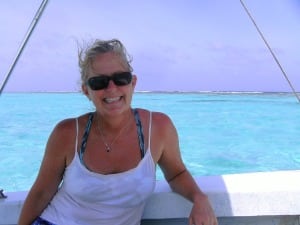 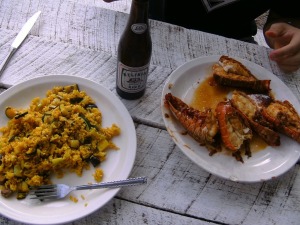 After our lobstering adventure, late afternoon was anti-climactic. We motored out to Shark Ray alley, where we chummed the triggerfish amidst dozens of nurse sharks, and Doug actually got to barrel-hug one of them! They seem to get in a trance when you turn them over and rub their bellies…..the trick is to get them turned over! 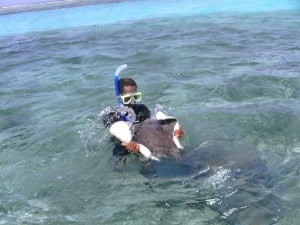 Our boat ride home from the Hol Chan (“little channel”) Marine Preserve was quiet and reflective. Ambergris Caye’s manicured resorts spread out before us. Did we really spend the afternoon like Robinson Crusoe?