The rainforest woke up slowly, as I jogged softly along the damp jungled lane, and up through the sleeping village of Bullet Tree Falls. An old man was tying up fish nets, a pile of rubbish puffed smoke into the already misty air, bands of dogs snarled, and a lone rooster crowed. I pressed on through the typical fog, which burnt off step by step, so that by the time I made my way back into Parrot’s Nest, a blue sky welcomed me. 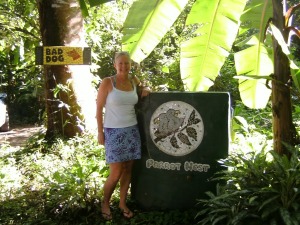 I packed my day sack with dry socks, my journal, sunglasses and bug dope, and a giant water bottle, and headed down out of my aerie to meet Kaite, whose Guatemalan coffee and homemade guava jam had become a daily ritual. I wrote in my journal as I waited for breakfast, filling whole pages with the botanical names surrounding me… bougainvillea and red ginger, heliconia (below left) and avocado, guanacaste and a dozen shapes of palm. 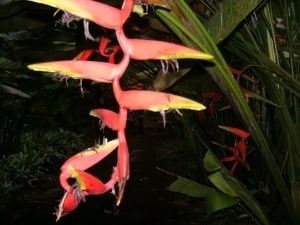 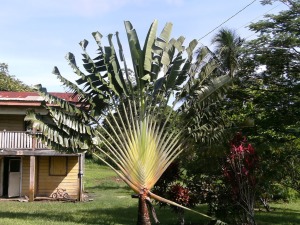 Jose, our PACZ guide, was soon announced by the Nest’s resident dog pack, so we gobbled down the last bites of omelette and dragonfruit and took off. 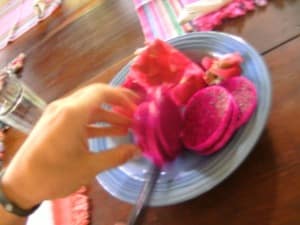 Wewere headed to the ATM cave!
The 45-minute route by van took us along highway with those axle-busting speed bumps, through small villages, and down a dirt road that wound through sugar cane and deep into the jungle… and that was before we struck out on foot!
Imagine Indian Jones-like trails, 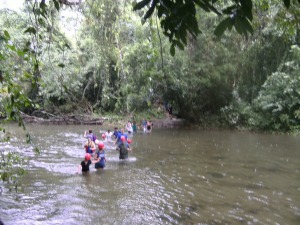 with full mudslides and river crossings, vipers and mosquitos. By the time our group reached Actun Tunichil Muknal entrance, we looked like authentic wilderness-worthy explorers (except for my pink Sony SureShot)
We got the rules: No food. No touching the cave formations. Headlamps on so you don’t get lost from the group.
With that sober warning, we, one by one, took a stride jump into the river at the cave’s mouth and swam after our guide, into the dark. 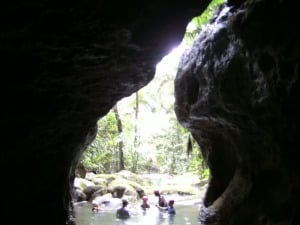 The spelunk took us meandering more than a kilometer into the mountain, stumbling along underwater boulders and squeezing through tight slits, then into cavernous spaces like The Cathedral, decorated with gargantuan, peach-hued stalagtites. We sometimes swam against the current and other times stooped, in the pitch black, to hear stories of early exploration or Mayan lore.
At one point, a fellow guest dropped his camera and almost slipped off a ledge to save it. An older woman struggled to get up a rock step as I marveled that the US would never allow this type of “recreation” without guardrails, electric spotlights, and a full legal release.
In the heart of the cave, we removed our water shoes and donned fresh socks to climbup (literally, up a 15′ ladder) to the sites of the Mayan sacrifices from around 900 AD . There were crushed pots – the mayans used to cook pots of food and smash the vessels, to”feed” the Gods. 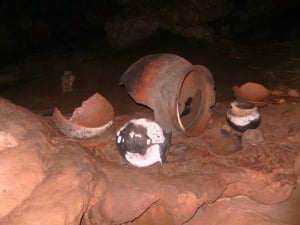 There were many sculls and leg bones (from victims as young as 1 year old), and, on a high shelf, free of the flooding that typically disturbed these remains, lay the perfect skeleton nicknamed the Crystal Maiden. This 18-20 year old girl… 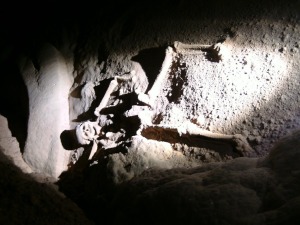 actually sparkles, from the calcite that has collected on her still bones over the last 1000 or so years.
ATM is uniquely pristine in Belize where cultural sites have often not been well protected. So we were dismayed to hear the story of a recent tourist who, while trying to get the perfect shot, accidentally dropped their camera right onto the mouth of the scull, breaking 2 of the front teeth in an otherwise perfect 1000-year-old “smile”.
The swim and hike out of ATM sapped the last of our energy and we all dozed as the van headed back to San Ignacio.
The countryside is full of Mayan ruins, though, so on the way home, we stopped at Xunantunich. Accessed only by a short ferry across the Belize River, this small site from the Classic period centers around a large tower, El Castillo. 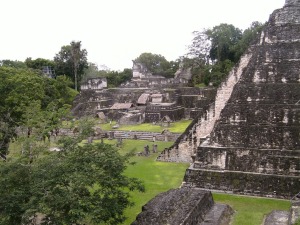 The temple has stelae which are carved with date glyphs 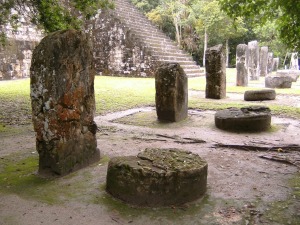 , and altars which illustrate important stories of the culture — for example, long tail feather engravings represent a bird from distant lands, indicating that the culture was sophisticated enough to trade with faraway tribes. 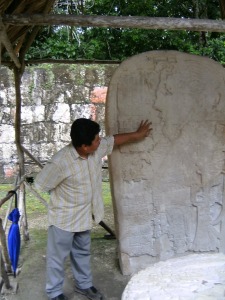 The life of this ancient city came alive as we stomped up ruin staircases, but the heat and exertion of the day had depleted us and we were ready to go home.
We finally reached Parrot’s Nest late in the afternoon. A group was just heading out with inner tubes, Marcus (our Nest host) ferrying them in his truck down to the put-in spot on the Mopan River. This afternoon ritual was enticing, but we chose instead to take a Belikin to our bunks up in Treehouse 2, for a siesta with our books and the singing jungle birds. 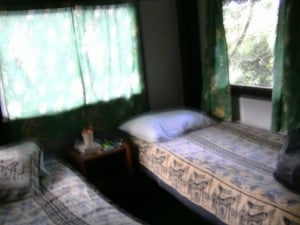 With dusk came cocktail hour on the wooden veranda, which overlooks the grass plain and the rushing river. 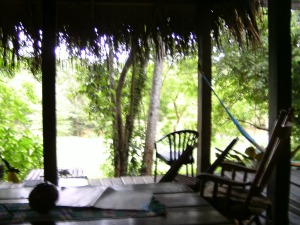 Our small band of quiet revelers settled into rustic tree branch chairs and, as if on queue, the fireflies started their show. First one blink… answered by a second… then a trio.. and suddenly, the grass was a tickertape of blinking golden lights.
Marcus pulled out a bottle of homemade wine (tonight it’s banana) and poured a round. We told about our adventures in the ATM cave and a few recent Miami U grads told about their home-building project which they’ve come to Belize to help complete.
We ate farm raised talapia (a jungle staple) and rice-n-beans, and a soft cornbread.
For me, that made a full day.
I was the first to retire to my treehouse. I propped up with my novel, but the clip of the ceiling fan mingled with the chirp of the night bugs, and my story was a mere jungle dream.