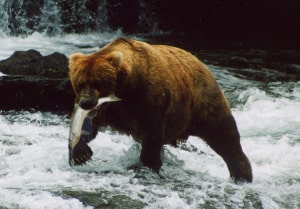 Rule #1 of Katmai Park?  When you see a grizzly, make yourself look big!  Raise up both arms and repeat in a big, firm voice, “Whoa Bear.  Hellooooo Bear.  Whoa Bear”.

We needed those instructions BEFORE our flight, though, because, as our seaplane banked into Brooks Falls Camp, we stared wide-eyed out the window.  We were landing in grizzly country!  Two on the shore, another by the woods.  Mama and her cubs in the shallows, another skulking by the trail, and, at the bridge by the Falls, an actual Bear Jam. It was a hair-raising position to be in, and my typically venturous sons crowded together for security.

The salmon were spawning, and Katmai was positively crawling with grizzlies!

So, we completed our bear safety orientation, stuck our graduation pins to our packs, and set out on the ½ mile hike down to the campsite, 5 wide pairs of eyes on the lookout.

We made it!  As we pitched our tents and separated out our bear edibles (food, of course, but also gum and even toothpaste!), I couldn’t help but eye the thin electric fence intended to protect the boundary of our campsite.  I tried not to imagine what would happen if any of these massively-clawed, grizzly-jawed, giants decided to breach the fence. But I was supposed to be the Fearless Group Leader, so I got the group chatting about the volcano we had just flown over and the “kitchen sink mashed potatoes” we had packed for camp dinner.  Before anyone could get anxious, we had stowed our gear in the bear-proof lockers, grabbed our books and travel journals, and were happily headed back towards the warmth and company of the lodge hearth.

Along the narrow trail we marched… me in the rear, following my 4 sons, led spiritedly by our family’s jokester, Robert.

Not 30 paces up the trail, though, Rob stopped dead in his tracks.  We train-wrecked into each other, as Rob thrust his hands high into the air, and quivered, in his 13-year-old Man-cub voice,  “Whooooooa Bear.  Helloo Bear.  Whooooaaaaaaa”.

Only a bodylength off the trail, out of a tangle of lingonberry bushes, 9 feet of lush black fur rose to tower over us.  Mouths agape, silenced, we listened to him slowly crunch his branch.  Close enough to see the shadowed furrows of his coat and his limp, black claws, curved comfortably against his chest, we got our first whiff of “bear”.

At that moment, the tome of summer ’02, Harry Potter’s Goblet of Fire, which had been clutched high up in Rob’s hand, dropped onto the path.

All I could manage was a whisper to Rob, “Do NOT pick that up!”And we began to backpedal, oh so slowly…

“Keep it slow, sloooow”, I quieted. “C’mon…c’mon”, they begged in whispers.

We made about 20 yards, then turned tail and ran- exactly what our bear safety guy had warned us never to do.  We jumbled in the gate and slammed the lock, as adrenaline overcame us, with laughter and sweat, and we patted each other on the back, hysterical with relief.

That’s when I remembered Rule #2:  If you see a grizzly, tell a Ranger. Like how?  The grizzly was BETWEEN us and that helpful park ranger!

Instead, we spied through the thicket of sitka spruce until we saw our mighty grizzly, sated with berries and salmon, shoving one last branch into his jowl, then ambling off to the lakeshore.

We snuck out the gate, and, gingerly retracing our steps, discovered the spoils of Rob’s Potter classic.  The pages were shredded across the path, and the blue linen cover was pierced by 2 giant canines. We had come mighty close to that mighty creature, and as proof, that cover remains our most prized travel souvenir, to this day!