Antiguan Congee and Ducana (or maybe not!)

I went in search of Congee – that Antiguan mashed-potato-style cornmeal side dish – and Ducana – a pumpkin steamed in fig leaf, tamales-style.  But instead I found local beer, BBQ, and (of course) fresh island fish, in an unexpected variety of venues.   Come along… 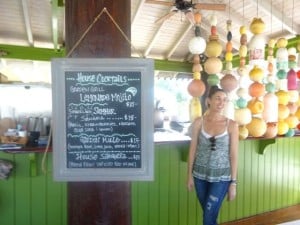 GARDEN GRILL: This outdoor nook up on Dutchman’s Bay may get the boring-name award but do not be fooled!  Erin, a Trinidad transplant, and her local staff dish out ingenious recipes that feel healthy and burst with flavor.  I had a quinoa salad with toasted nuts, arugula, garbanzo beans, herbs, and cranberries, then a curry chicken salad and a grilled Wahoo salad on a brioche bun (perfectly soft and not too big! – this spot gets the details right!) with a Summer Sangria, Erin’s unique recipe of fresh raspberries, mint leaves, and berried wine was the best I’ve ever had – seriously!

BEN’S BBQ: Around the corner from the airport, in search of the Gourmet Basket for provisions, I bumped into Ben’s Bar and it’s attached BBQ joint.  The rib meat fell off the bones, and the salad was crispy fresh.  We took it to-go and enjoyed it over sunset from the porch of our private seaside cottage (see Feb 13 blog for more about this cute cottage!)

SUNSET AT COCONUT GROVE:  Maybe the most touristy of my recommendations, it made the list because you simply cannot beat the seaside location with front row seats for sunset on the west coast’s Dickensen Bay.

We had some smoked Mahi Mahi carpatio which was okay, but the Pinot Grigio and the Mango Mash were just perfect.

MAMA’S ITALIAN AND WEST INDIAN: What is better – the goat curry?  the shrimp stir fry?  or eating in sandy feet with the sea breeze off of Long Bay flowing over your table and a backdrop of the turquoise Caribbean?

It’s right down the beach from a Sandals property so you’ll fear that you’re walking into a tourist trap.  But don’t worry.  This little gem is the real thing, with a cantankerous gruff matron who runs the kitchen and Cecil, the happy accommodating waiter.

LOCAL BEER:  What am I doing with a Banks on Antigua?   After the British took over the islands and renamed them, an enterprising beermeister moved across the Caribbean, giving each island its own namesake brewery using their pre-British names.   So Antigua’s island lager is called Wadadli.   Save the Banks for Barbados.

PAPA ZOUKS FISH HOUSE and RUM BAR:  This local spot is now 17 years old.  It was inspired by an old friend who used to cook up fish, right out of the boats on a roadside stove – and locals as well as the occasional visiting celebrity lined up to buy it.   When this al fresco cook tried to get fancy and build a restaurant, something was lost from the original recipe and ambiance, so Papa Zouk and his wife opened their own cozy eatery with a pebble floor, picnic tables, hanging nets, and wall murals painted by a local artist.

Almost better than the whole grilled Snapper is the rum selection and in fact, Papa Zouks won a Best  Rum Bar in the Caribbean:

A man excuses himself to offer a brand-new bottle of rum to the counter of the bar.

But this is no ordinary bottle. It is an Appleton 21. And it is a gift, a gift to this bar.

The bottle joins more than one hundred others: Clement, St James, Angostura Single Barrel. The greats and the goods and the necessities.

In fact, one year ago, Papa Zouk‘s was almost destroyed by a fire and so today, rebuilt and better than ever, you can purchase a slug of not just one of these vintage rums, but also a fire rum – rum salvaged from the embers and all mixed together for the perfect fire-branded melange. 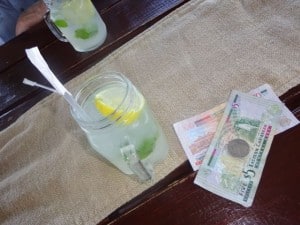 RUNNER-UPS:  If you’re on the island Tuesday – Saturday, try to snag a reservation at 6-table Stellas, up a steep hill by Dickenson Bay.

And for a light meal, venture into Fort James for Russells. It says it closes at 6 but don’t believe it.  And watch out for that front step – it’s a doozie!

You can use your US$ in Antigua but you’ll get EC (Eastern Caribbean) currency for change.   It’s 2.5-to-1.

Enjoying these island escape stories?  Stay tuned for our next blog featuring ACTION footage, straight off the GoPro!

Want to talk about your next adventure?    Contact Rare Finds now.