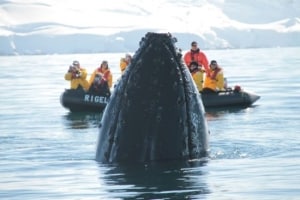 Is Antarctica on YOUR bucket list?
Click here to get a free session, to talk about it!

The momma Humpback rolled slowly over the obsidian surface, and her eye met Jeanne’s.  She and her baby surfaced again, closer, and finally, brushed the rubbery zodiac with her barnacled flipper, then dove deep, not to be seen again.
Jeanne looked at the man on the seat next to her.  He looked dazed… seasick.   “Are you okay?”

This once-in-a-lifetime whale encounter was goosebump stuff.
Antarctica penguins, on the other hand, are scattered all over the islands and peninsula, and have become an icon of this beautifully hearty and wild landscape.

WHERE DO YOU CRUISE TO SEE ANTARCTIC PENGUINS? 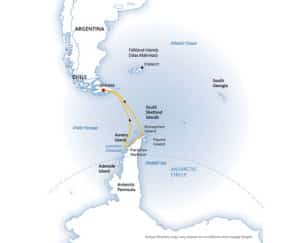 The typical route departs from Ushuaia, in southern Argentina,  to cross the Drake Passage, followed by an entourage of petrels and gulls.  You cruise past Nicholson Harbor and through Deception Island, and even — in many cases — stop on the actual Antarctic peninsula.
NOTE:  did you know that you can actually SLEEP (in a tent) on the Antarctica continent one night?
Antarctic penguins live throughout this region, each having its own latitude and migration schedule.

WHAT KIND OF ANTARCTIC PENGUINS DID JEANNE SEE? 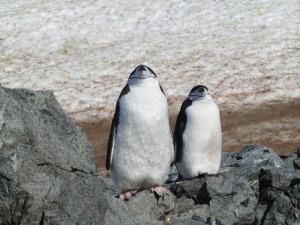 There were Magellans and Chinstraps,

Adelies and Macaronis.  The only variety of Antarctic penguin that remained elusive was the Emperor (but they did get to watch March of the Penguins on Quark’s looping library of Antarctica-themed movies)

DO ANTARCTIC PENGUINS EVER CO-MINGLE?
Jeanne did witness one guy — just standing in the midst of a thick colony of Chinstraps, looking checking out his neighbors. 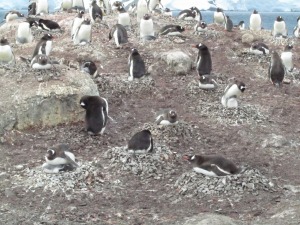 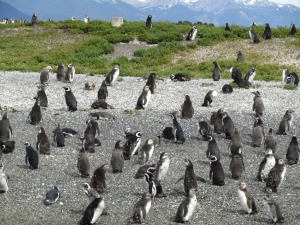 In general, though, the varieties of Antarctica penguin live separately.

DID THE ANTARCTIC PENGUINS HAVE CHICKS? 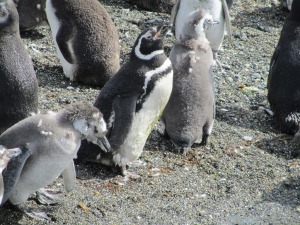 Boats cruise Antarctica from December to March.  By the time Jeanne cruised in late January, the chicks were hatched and largely independent from their parents.  The Antarctic penguin chicks were still easy to spot, though, by their spotty molting coats.

WHAT WERE THE ANTARCTIC PENGUINS DOING? 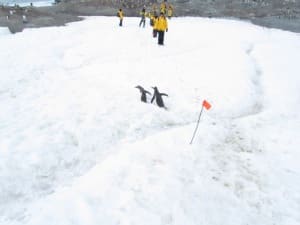 Some were arguing.  Over what?  Nothing obvious.  Their chicks were hatched and food was consumed in the water, not on land.  Spats tended to be a sudden, explosive
BLAH BLAH BLAH BLAH,
and then it was over.

Some were swimming.  During the early chick stage, Antarctic penguins have to take turns, sitting on the nest with the babies,  but by midwinter, the adults could go for a swim and hunt!

WHAT’S THE MOST SURPRISING THING ABOUT ANTARCTIC PENGUINS? 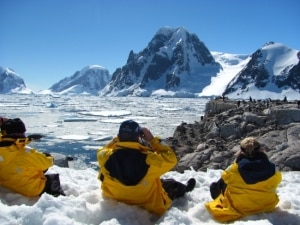 The penguins seem to know no fear.  You are strictly instructed to stay at least 15 meters away from them, and oftentimes, Jeanne would set up at a distance to the colony, with observe with binoculars.

What typically happens, though, is that the penguins wander right up to you.  Jeanne got within 2′ of a Chinstrap!
The penguins sort of pause, look for a path around you, look right AT you.
Then they often will waddle up and actually peck at your shoelaces or pantlegs!
This complete lack of fear of the Antarctic penguins surprised Jeanne the most!

IS THE POOP OF ANTARCTIC PENGUINS AS SMELLY AS RUMORS SAY?
No.  Even as the Antarctica penguin chicks fledge and the nesting ground falls into chaos, the odor is minor.
The guano — which is bright red — does make, though, a remarkable scene.
One traveler stood at the register with a colorful postcard in hand,  before she realized that the adorable penguin was photographed on a giant red mound of poop! 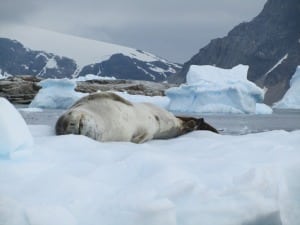 WHAT OTHER ANIMALS DO YOU SEE BESIDES ANTARCTIC PENGUINS?

Seals, like this Leopard Seal, sleeping on the iceberg.

Skua  gulls, who love to scavenge the carcasses of penguin chicks.

And, of course, whales.  Not just the humpback that dazed Jeanne’s friend on the zodiac but also Minkes and sometimes even Orcas.

Want to hear some super-cool things to do in Antarctica?
Jump off the boat at Deception Island and swim between the underwater volcanic steam vents and the icebergs!
Kayak at surface level with the humpbacks!
Send a postcard from the Antarctica  Post Office!
Hike in the steps on Shackleton!
Call me NOW to see what YOUR Antarctica possibilities are!
(609)923-0304