Costa Rica monkeys range from cloud forest to coast, and here are scenes and stories of the Top 4:

Howler Monkeys are the best known.  They make a huge racket — at passing planes, people, thunder, sunrise and sunset, and sometimes even in the middle of the night, if someone wiggles their branch or otherwise upsets them.  They can be heard up to 3 miles away!

Haven’t heard what Howlers sound like?  Here’s your chance!

but travel in gangs of 20 or so, called Troops, so you typically see them like this:

swinging through the branches on their famous prehensile tail!

White-headed, or White-faced, capuchins are much smaller, and just as common.
They love to eat insects and bark, but fruit is more than 60% of their diet — and it was there, surrounded by small red clusters of berries in the low bushes alongside the canal,  where I met my white-faced friend in the Tortuguero jungle.   He wanted to jump into my canoe:

They are incredibly smart monkeys — they’ve been known to use barks of tree to rub on their bodies medicinally, and they make and use tools out of the jungle materials.

Squirrel monkeys are the smallest of the CR species. They roam along the Pacific coast, and typically are referred to as red, since their backs have orange-y fur: 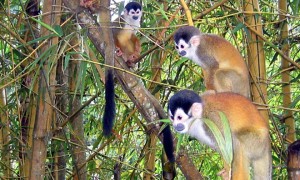 Lots of info on their Manuel Antonio habitat and footage of the little squirrel monkey is in a great video. Check out Minute 3, on the video, for a very special encounter:
A visit with Squirrel Monkeys in Manuel Antonio!

Geoffroy’s Spider Monkey is the 4th main species, but I have never met one.  Not surprising, since this species has the highest endangered rate of all the top 4.

He’s the largest of all the monkeys — can be 25″ and has arms which are comically elongated past its body. (want to be technical?  Its arms are 25% longer than its legs!)

It forages by day in small groups, often on the ground, and needs large tracts of land to support its enormous exclusive-fruit diet. 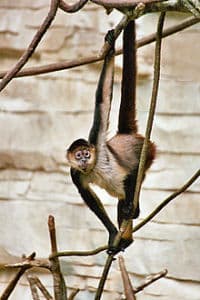